How to Thicken Soups, Stews and Sauces

Here is our round-up of how to thicken soups, stews and sauces for anyone counting calories or following slimming plans. 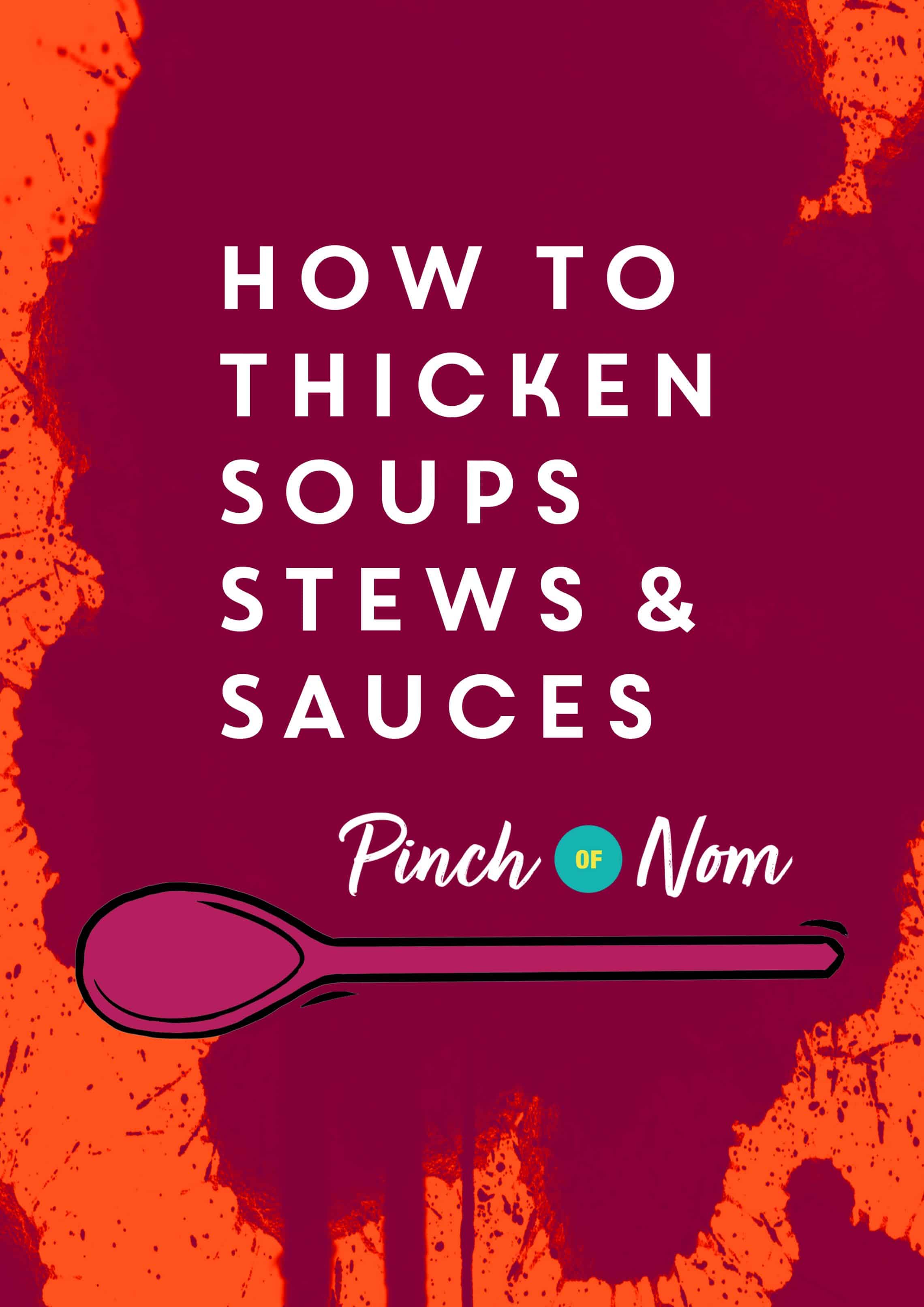 Something we get asked about quite often, here at Pinch of Nom, is ‘How can I thicken this…..?’

Pre-slimming we wouldn’t think twice about using a good few tablespoons of flour to thicken a soup, or a pan of gravy. Now, however, we’re always on the lookout for some lower-calorie options.

There are many ways to thicken dishes, so we thought we’d run through some of the options. Some are lower in calories than others, depending what diet plan you are following. The best option for you will depend on the dish in question and your specific requirements.

Thicken by Reducing the Dish Itself

This is a great way to thicken soups or stews without having to add anything extra to the dish.

Your first option is to  leave the pan over a low heat and simmer until the liquid has reduced and the dish has thickened.

Another great option is to remove some of the chunks from the soup or stew (a few spoonfuls of the vegetables and meat) then blitz it to a puree with a food processor or stick blender. Stir it back into the remaining soup or stew and it will thicken instantly. 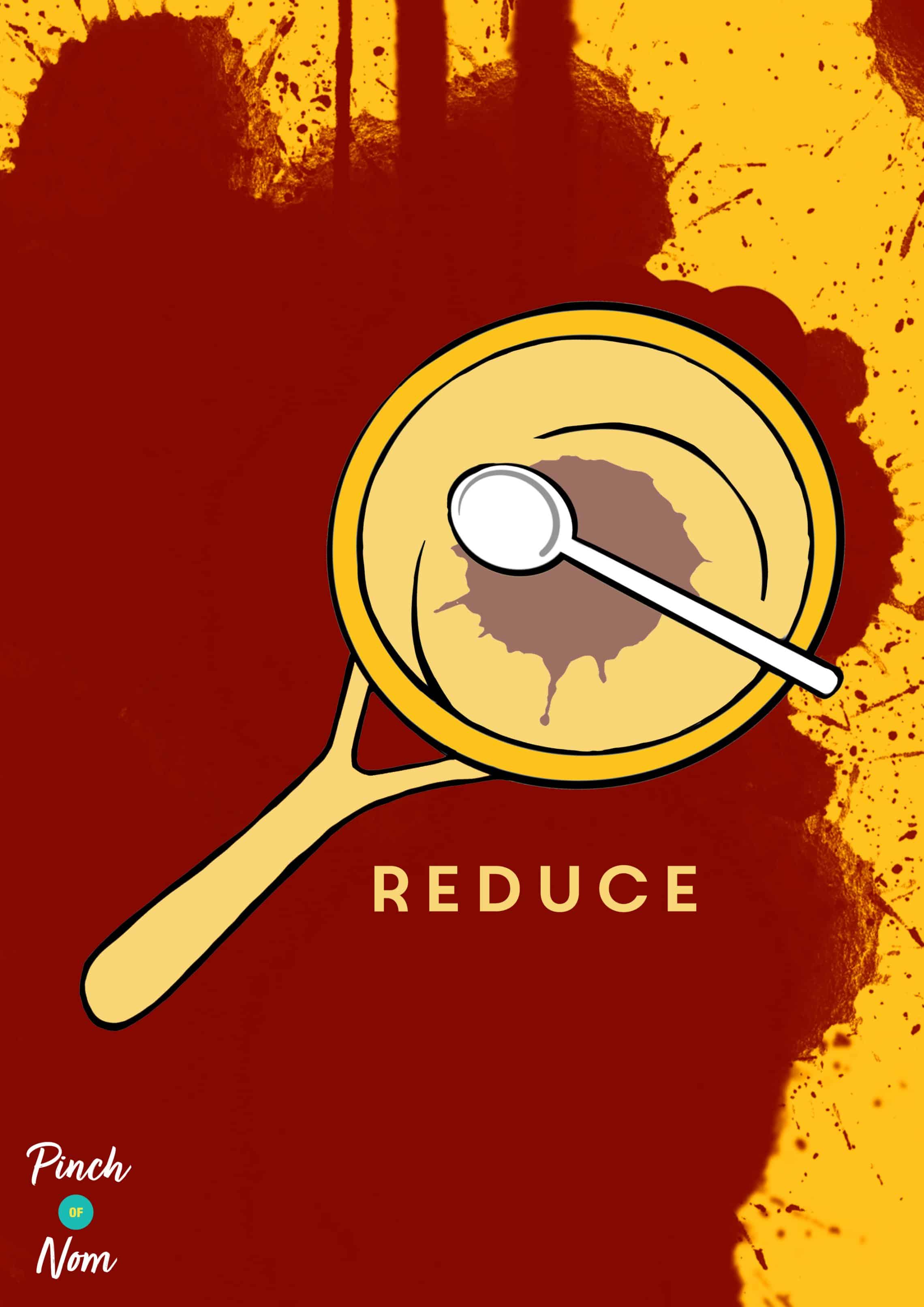 This method adds no extra calories and keeps the Weight Watchers Points the same in the dish.

Potatoes can be mashed or blitzed to thicken your dish. If it already contains potatoes you will probably find it will thicken slightly anyway, just by simmering the potato in the liquid. This is because of the potato starch. 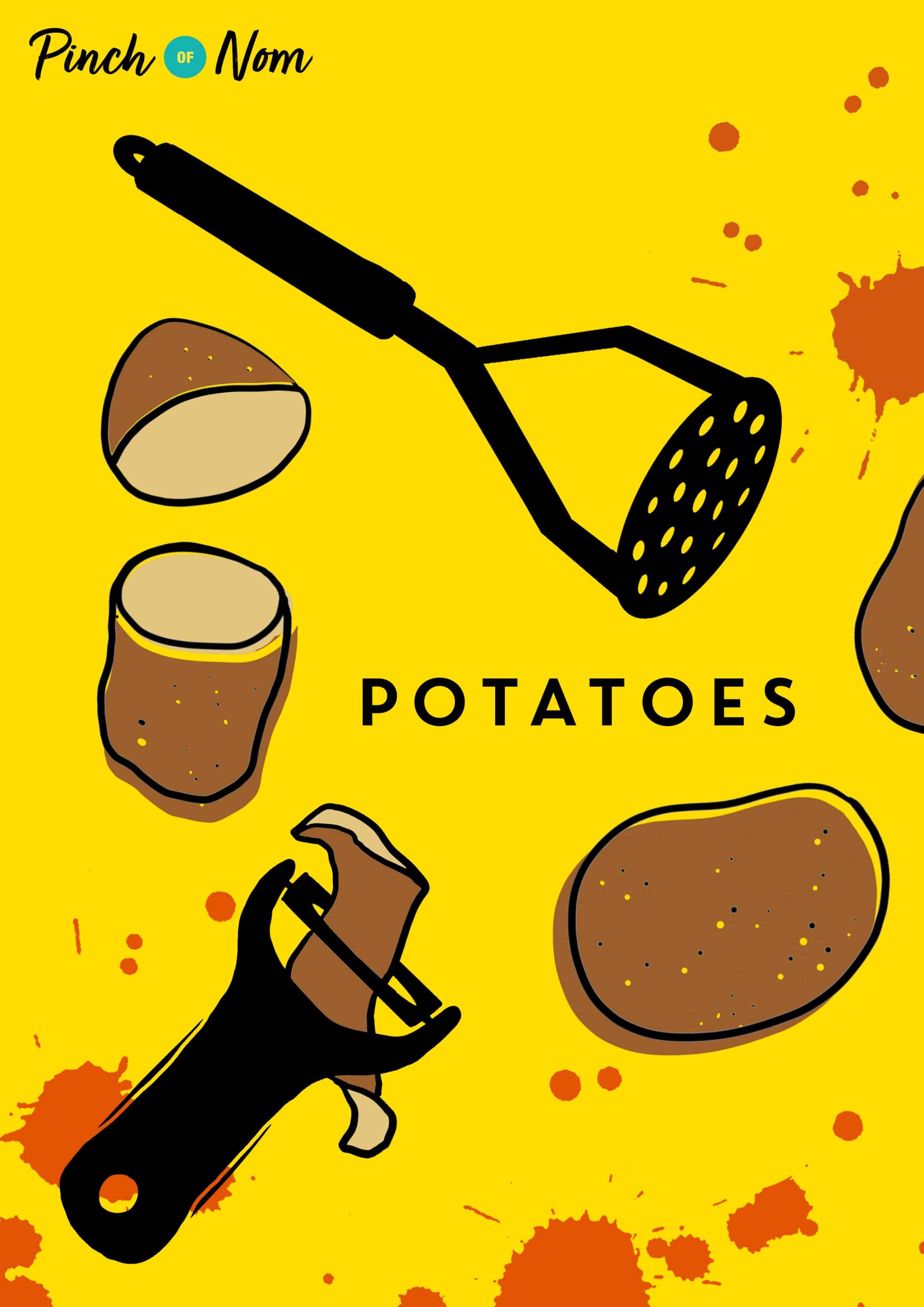 We use potatoes as a thickener in lots of dishes, including the curry sauce for our Katsu Chicken Curry recipe! 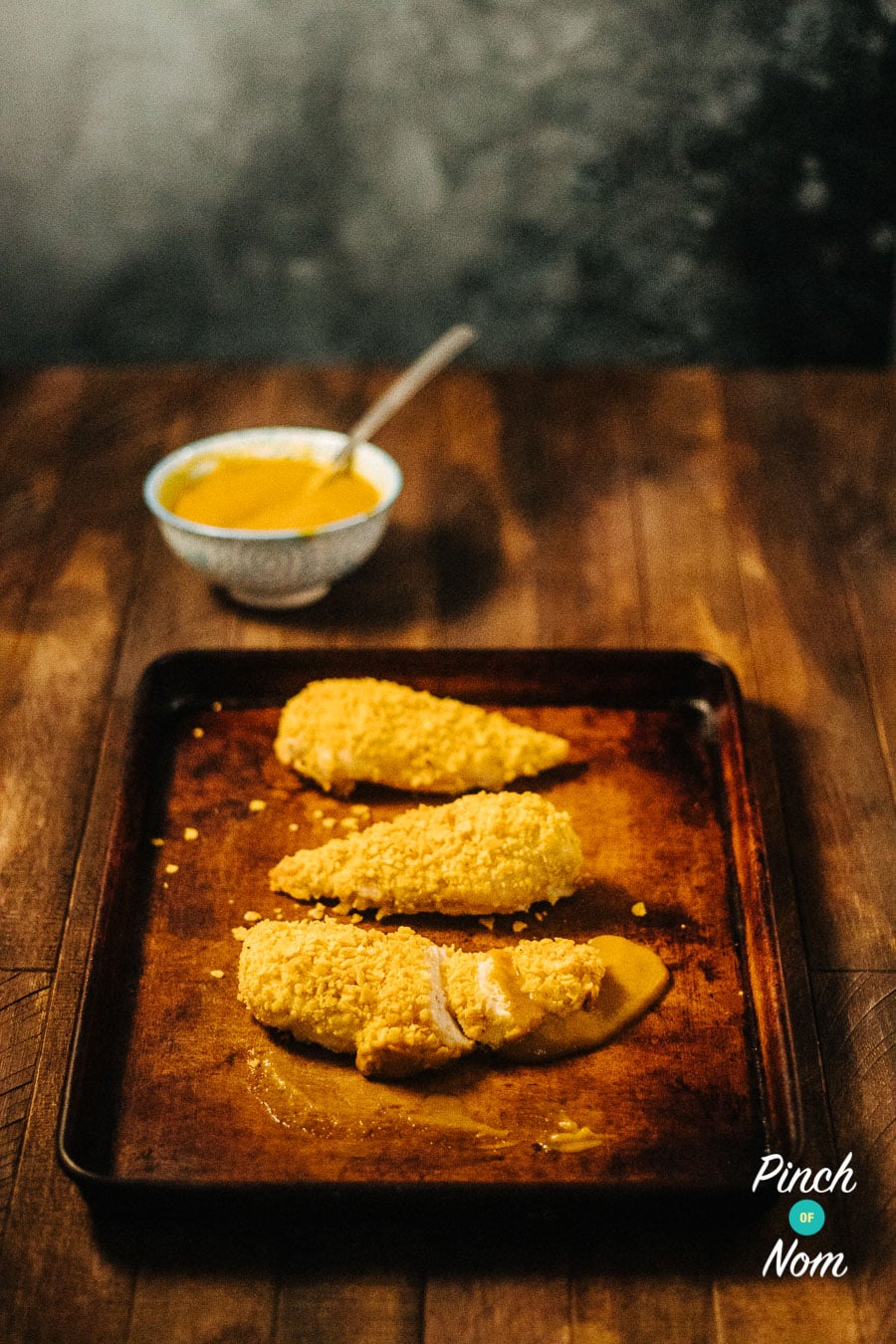 If adding extra potatoes to thicken the dish remember there will be extra calories. As a guide 1 large potato is around 283 calories. You will likely be able to use half this amount and remember that the calories will be split between the number of portions in the dish.

There will be extra Points using potatoes to thicken if  you are following Weight Watchers. The amount depends on how much potato is used, but as a guide 1 large potato is 4 Points.  You will probably only need half this and remember to split the amount per portion!

If you’re making a tomato based dish, like soup, tomato sauce or bolognese you can thicken it slightly by adding some tomato puree. 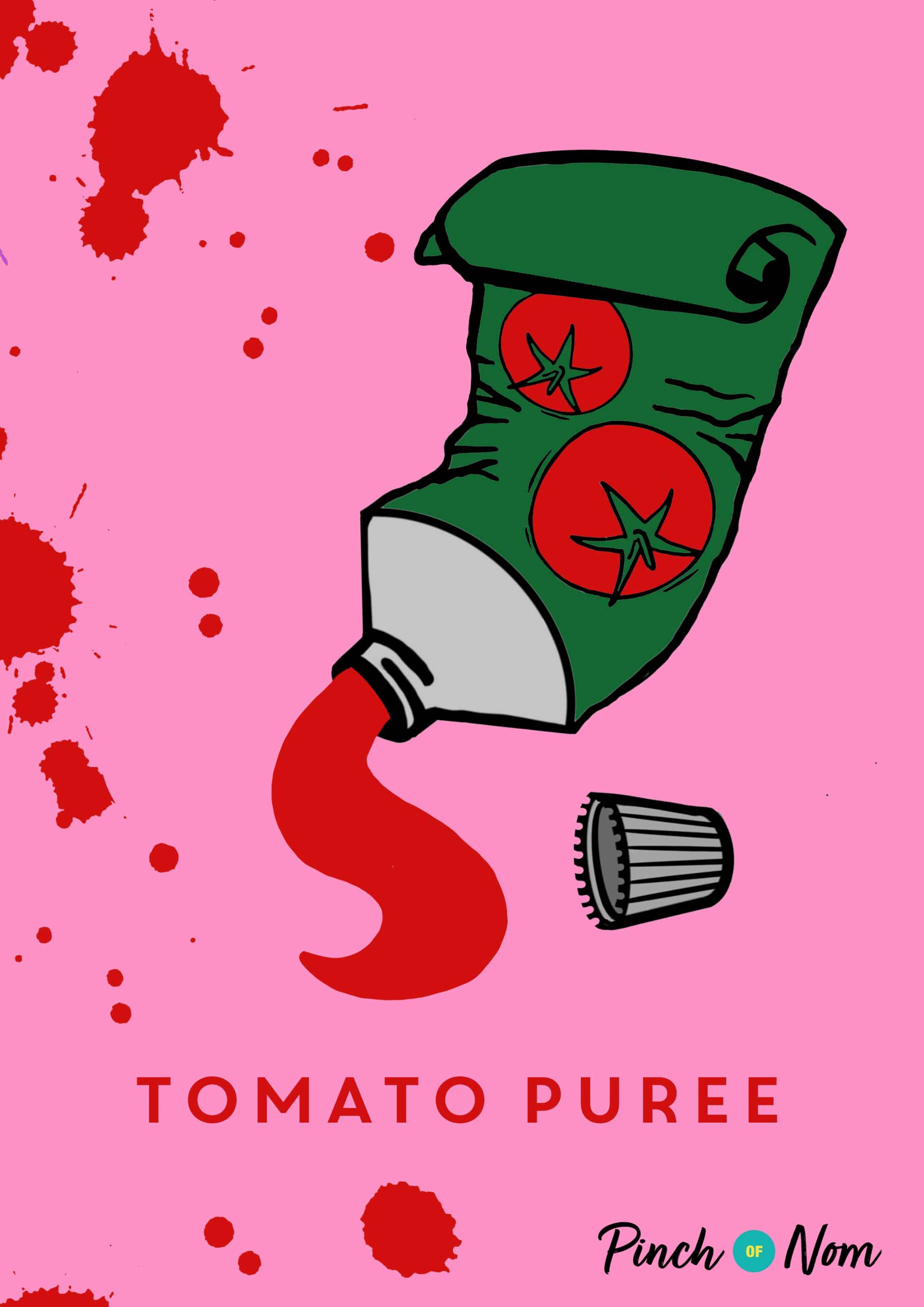 We use tomato puree in many of our dishes, including this tasty Baked Spaghetti with Chicken! 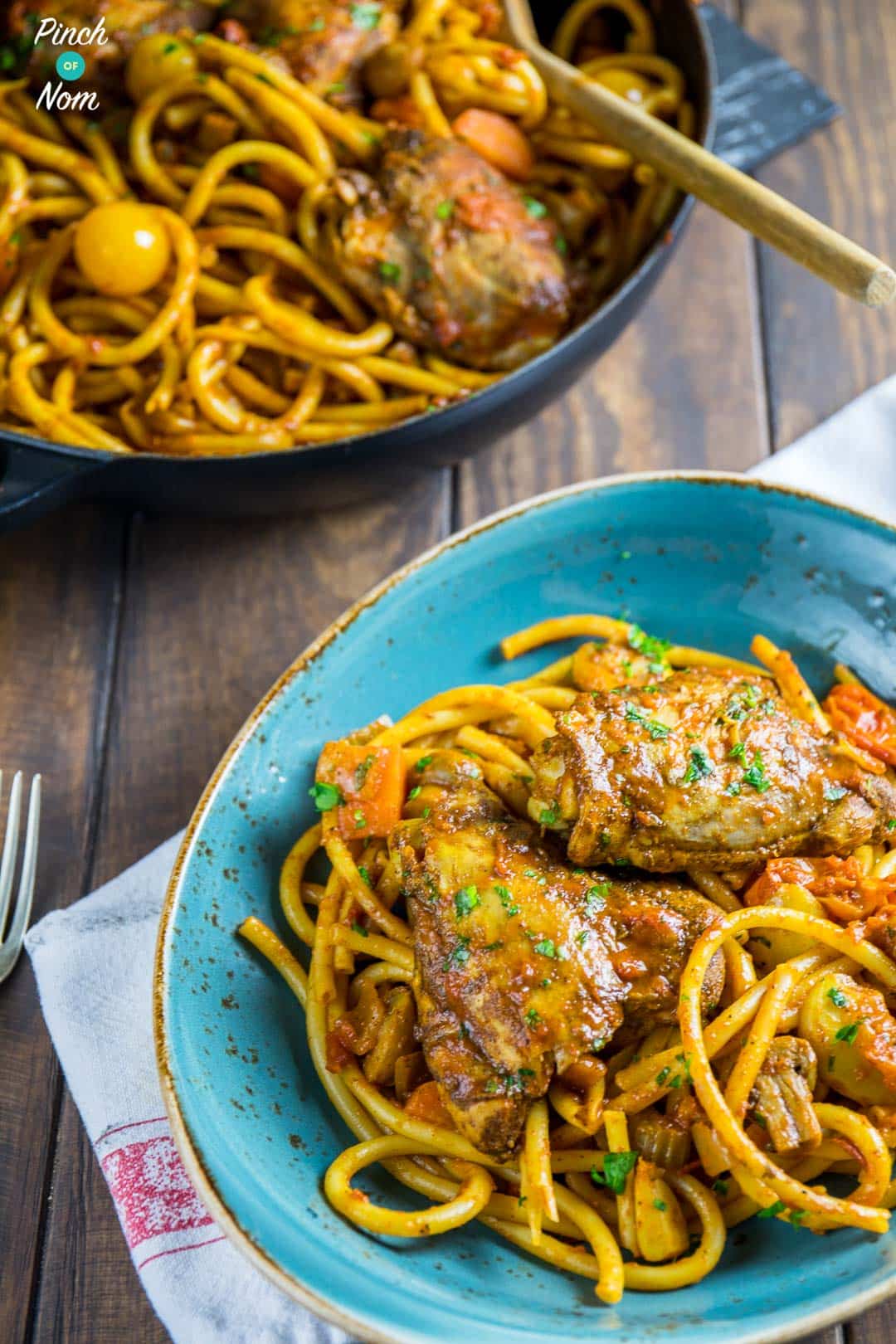 This method will add some extra calories, but not lots. Depending on the brand of tomato puree you choose there will be around 6 calories per level tablespoon.

There is 1 Point for 2 tablespoons of tomato puree when following Weight Watchers.

This is made from glucose (obtained from things like cane sugar) which is fermented with a bacteria that’s found naturally in plants. It’s actually the same bacteria that forms the little black spots on veg like cauliflower, carrots etc (Xanthomonas Campestris if you want the fancy name). The resulting fermentation is then dried and made into a powder. It’s used as an emulsifier to stop water and oil separating. 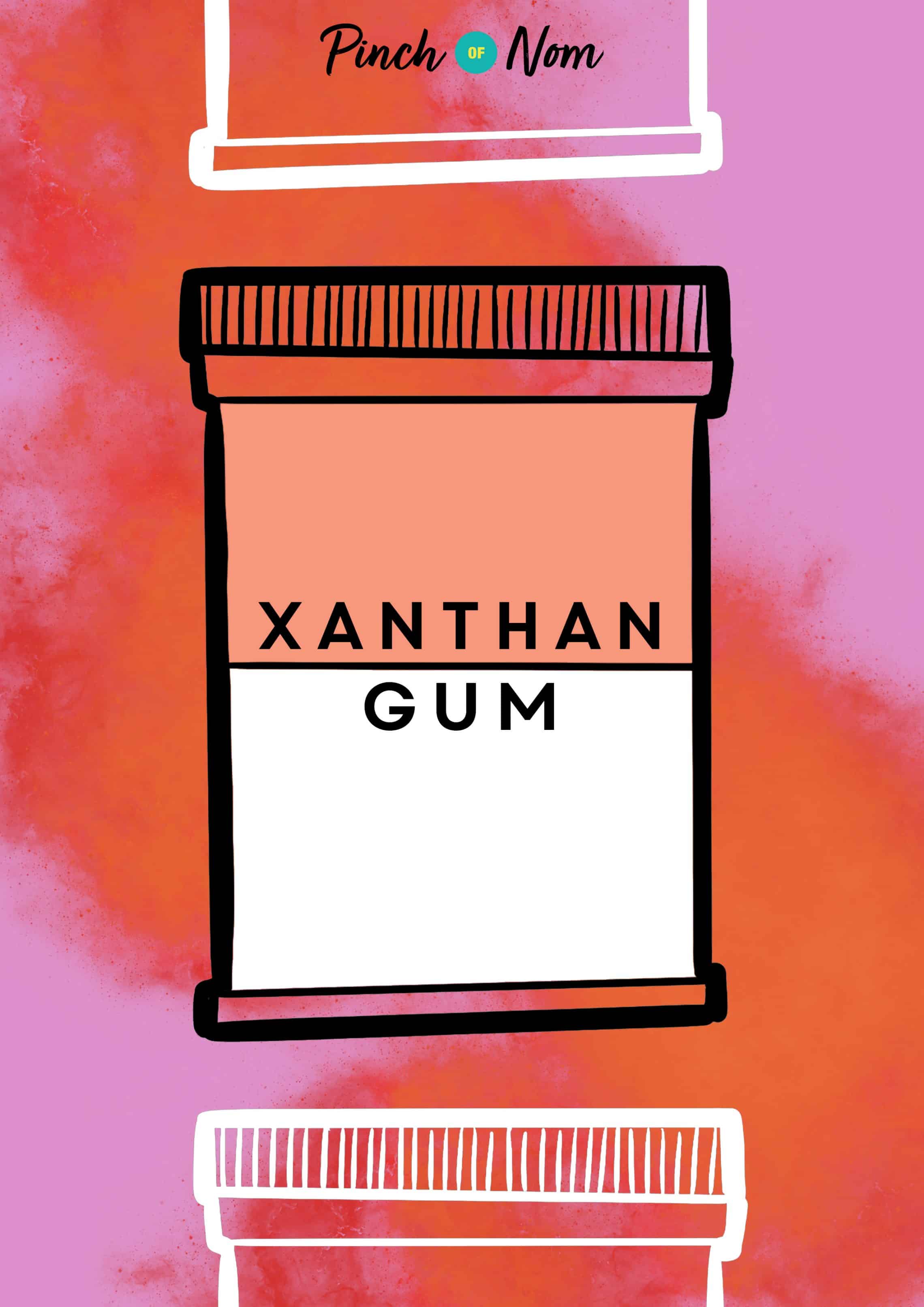 Xanthan Gum is used in many things commercially. Salad dressings, yogurts, mayonnaise and even in some ice creams to stop ice crystals forming. It’s also gluten free so it’s often used to improve the crumb structure in gluten free baking, and as a cornflour substitution when thickening sauces.

Thickening with Xanthan gum is very easy. All you need to do is whisk a very small amount into the liquid you want to thicken. It’s important to stir it in well, or your dish may end up lumpy.

When we say a very small amount, we’re talking a quarter of a teaspoon at a time. If it’s not thick enough add a tiny but more.

Xanthan Gum thickens quickly so you’ll know if you need to add more pretty much immediately.

An important note, be very careful using this or you may end up with a pan of wallpaper paste-like gloop! Less is definitely more.

We use Xanthan Gum in a number of our recipes, like this delicious homemade Sweet Chilli Sauce! 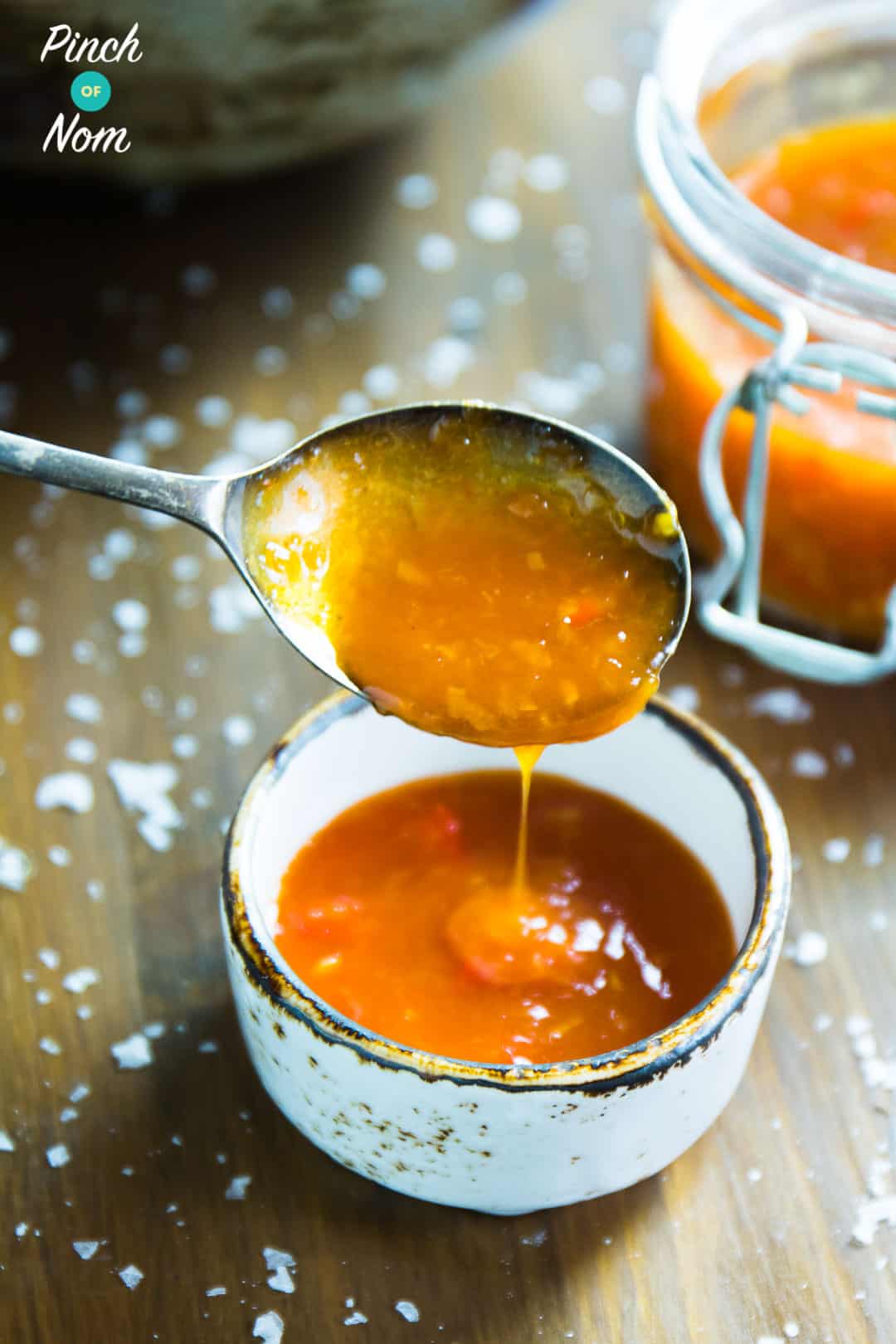 Because you need so little, adding Xanthan Gum will only add a few extra calories to a dish. 1/2 teaspoon is only 6 calories.

There are 0 Points on Weight Watchers for the amount of Xanthan Gum you will need in your dish, making it a great option for thickening your dishes!

You can use egg yolks or whole beaten eggs to thicken some soups and sauces.
First you need to drizzle a small amount of the hot liquid onto the egg, whisking vigorously as you pour. Then stir the egg back into the pan and heat gently until it starts to thicken. 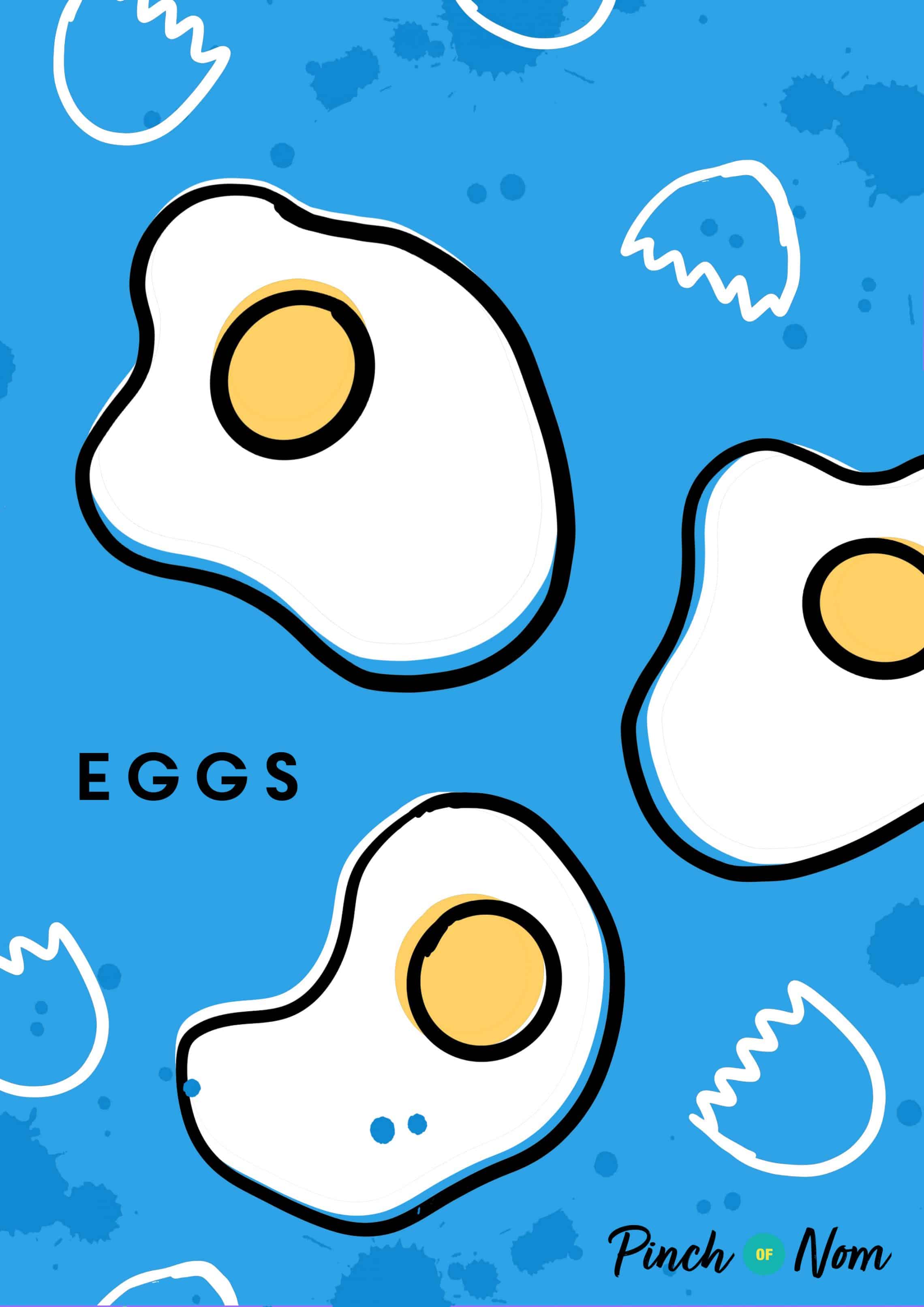 This is a similar method to the one we use in our Carbonara recipe!

This method will add around 55 calories to a dish per egg yolk – remember to divide that by the number of portions.

Eggs are a Zero Point food on Weight Watchers so no need to add extra Points to your meal with this method!

As I mentioned earlier, flour was the go-to method of thickening before our slimming journey.

There are two ways to use flour for thickening. Traditionally you would add it to some melted butter to make a roux, then add the liquid, but as the butter would just add loads of calories, the better way is to make a slurry.

To do this just mix the measured flour with a little water, then stir it into the boiling liquid.

This will thicken the dish almost immediately, but don’t be tempted to remove it from the heat just yet. If you do you will end up with a claggy, floury taste.

The flour needs to be cooked out, so let it simmer for a few minutes.

Plain Flour is around 30 calories for 1 level tablespoon so you will need to factor this in if you are calorie counting.

There are 2 Points in 1 tablespoon of plain flour so keep this in mind if you use this method when following Weight Watchers.

This is another instant thickener!

Cornflour should be mixed with a little cold water to make a slurry, then added to the boiling liquid. Cornflour doesn’t need to be cooked out for as long as flour, so can be removed from the heat as soon as the starchy taste has gone. 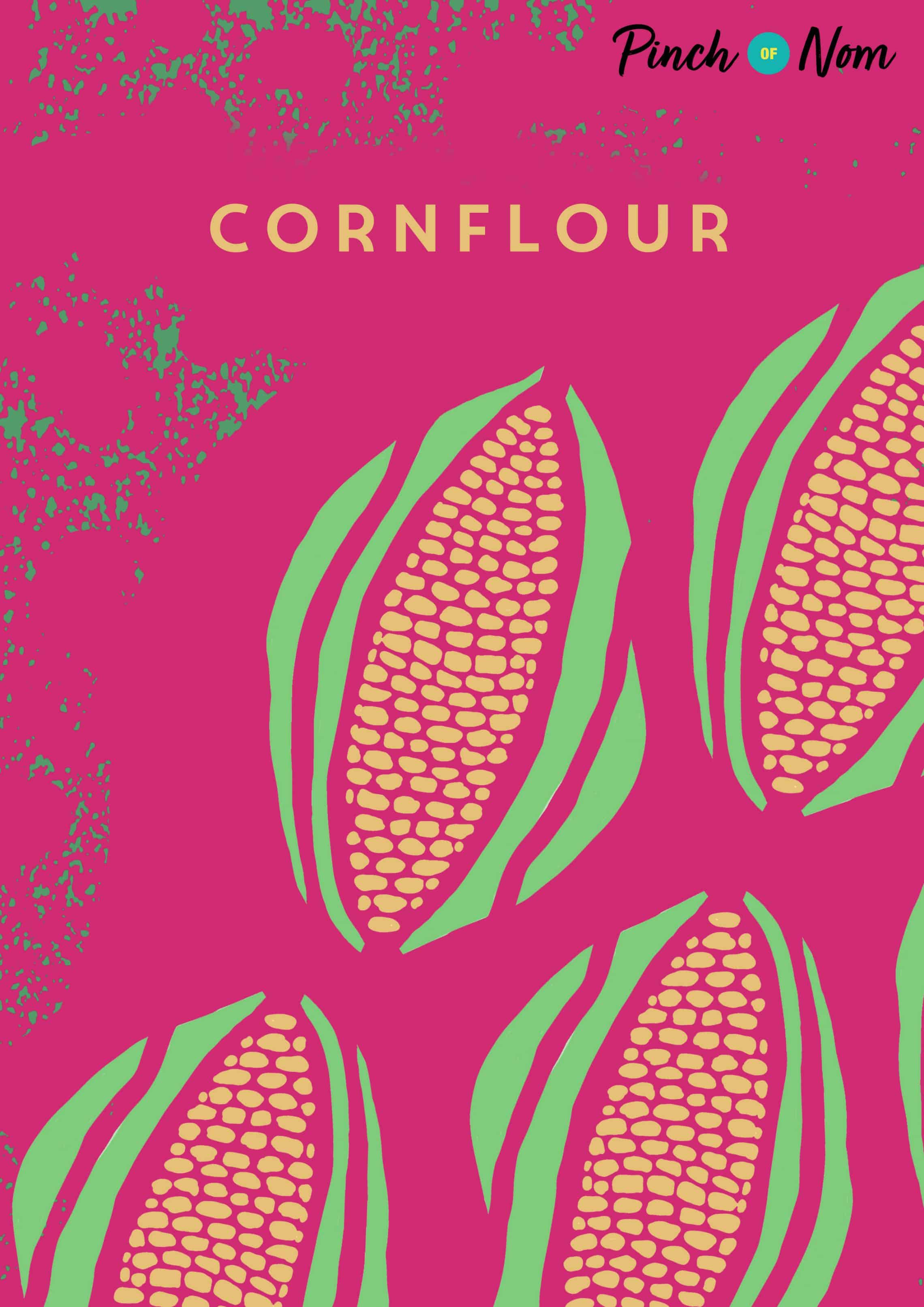 It’s generally used for thickening soups and stews as it makes the liquid cloudy and opaque when added.

We use cornflour as a thickener in this delicious Brandy Sauce recipe, which is well worth giving a go! 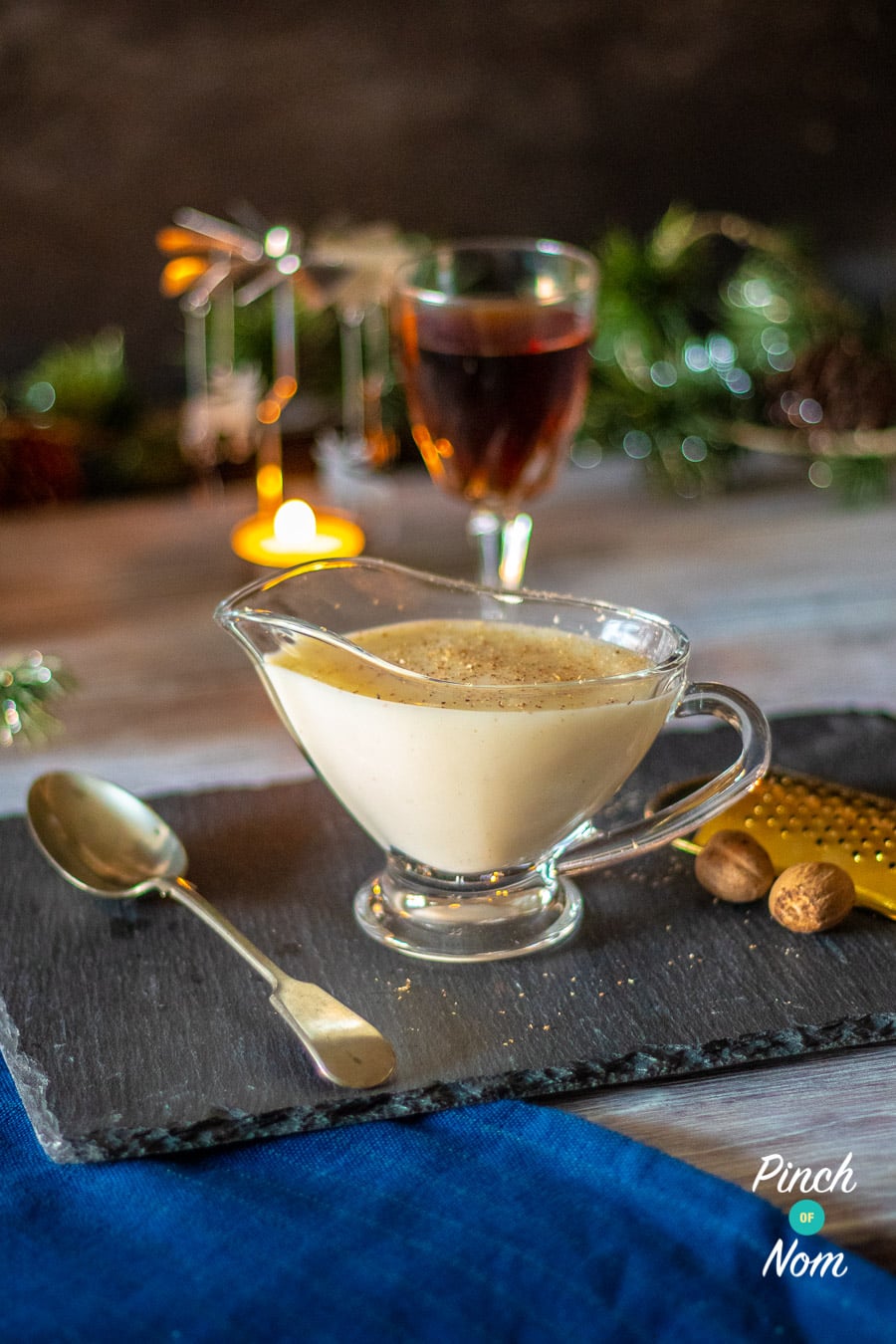 Cornflour is around 31 calories for 1 level tbsp so you will need to factor this in if you are calorie counting.

There are 2 Points in 1 tbsp of cornflour so keep this in mind if you use this method when following Weight Watchers.

Arrowroot Powder thickens instantly, like cornflour but it doesn’t discolour the liquid or affect the taste. It’s often used in things like puddings and jellies. 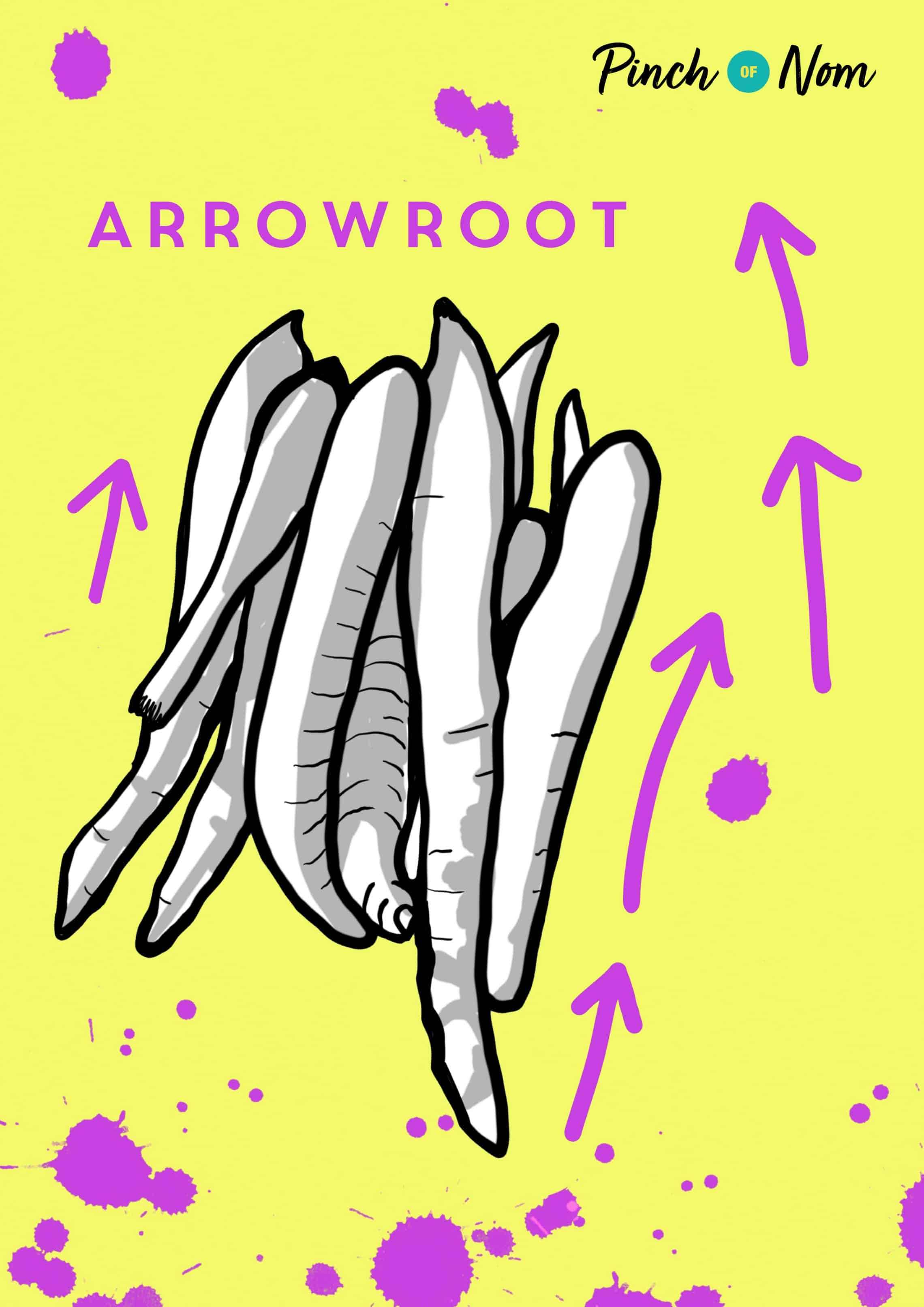 There are 29 calories in 1 tablespoon of Arrowroot Powder, only slightly less than cornflour.

If you’re making a stew or a chilli, it’s tempting to just add a sprinkling of gravy mix to the pan. It’s an effective way of thickening and adding flavour, but it can add quite a few more calories to the dish if you use a heavy hand. 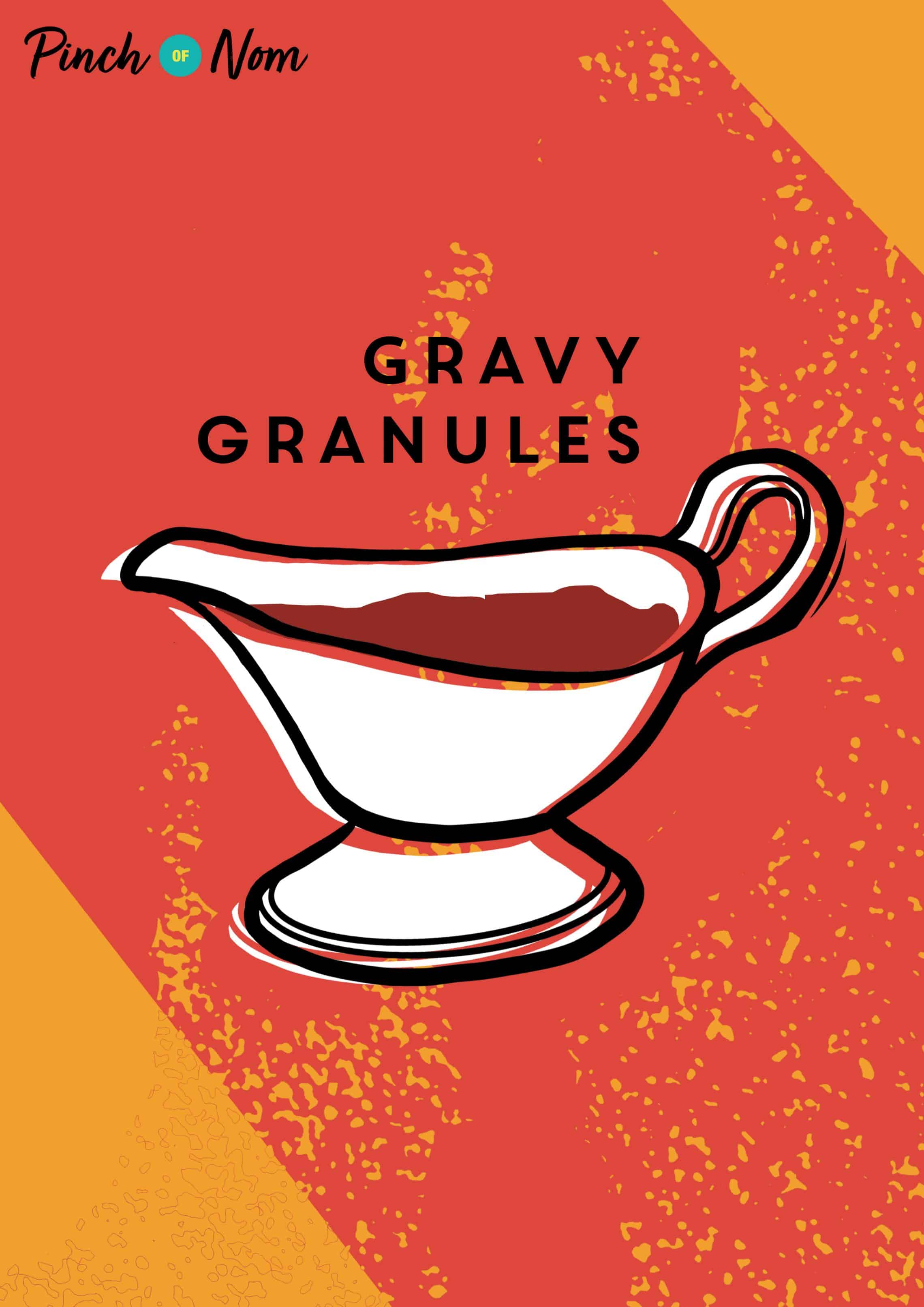 There are around 17 calories per teaspoon of gravy granules (depending on the brand you chose) so make sure you account for this if you use this method. It’s easy to use lots more than this!

Gravy granules come in at 1 Point per heaped teaspoon for people following Weight Watchers so make sure to count them in your dailies.

If you want to make an amazing gravy without any granules, we’ve got you covered here! 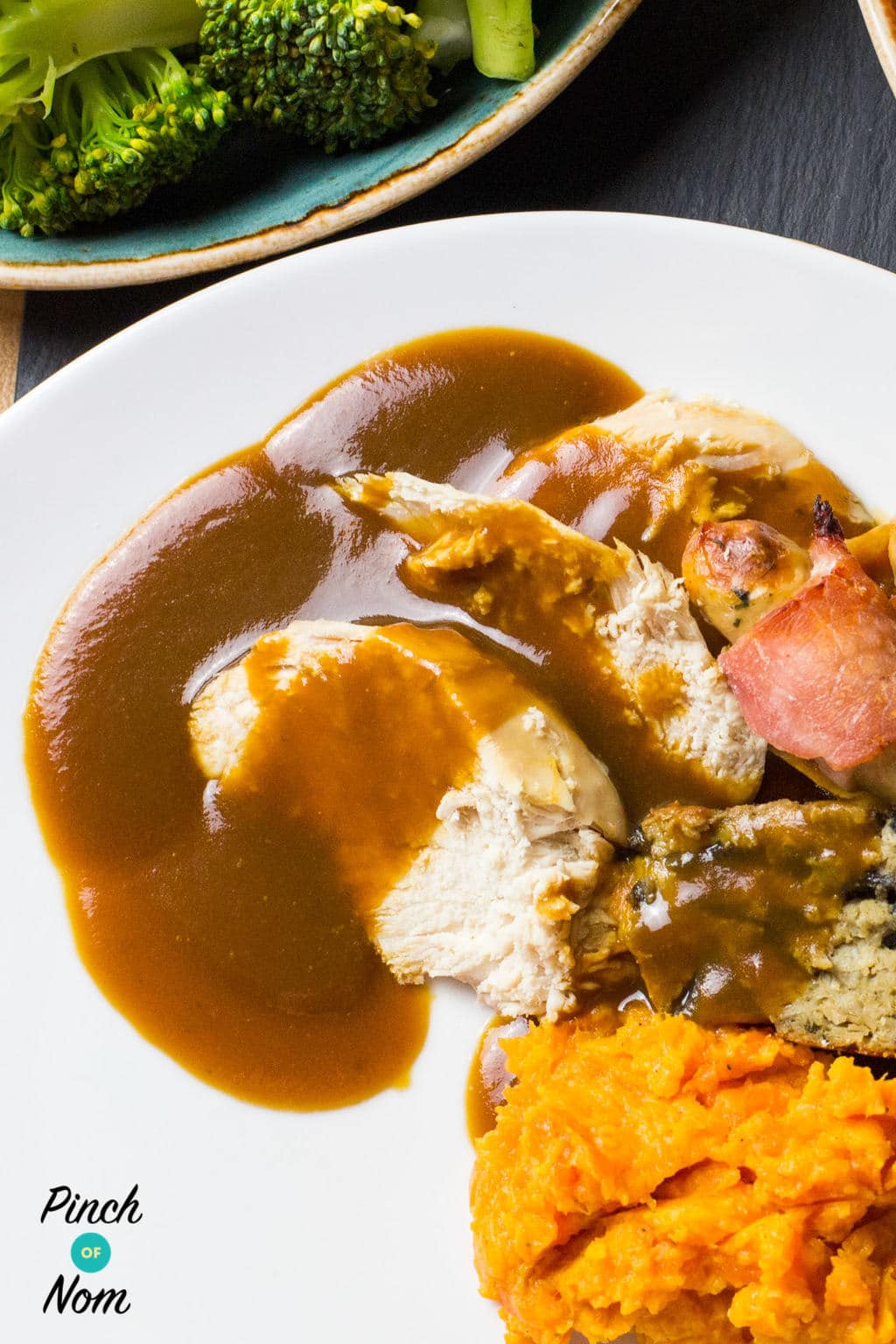 Need some extra help & motivation on your slimming journey?

Come join our Facebook group! We have over 850,000 members, who want to help you! You wouldn’t want to miss out on the fun would you?

You might just find the inspiration you need from our awesome members. If you’ve joined already why not invite any friends that may find it helpful?