The 28th January marks the second birthday of Pinch of Nom! Yes, two years of a whole heap of slimming recipes, advice and inspiration. 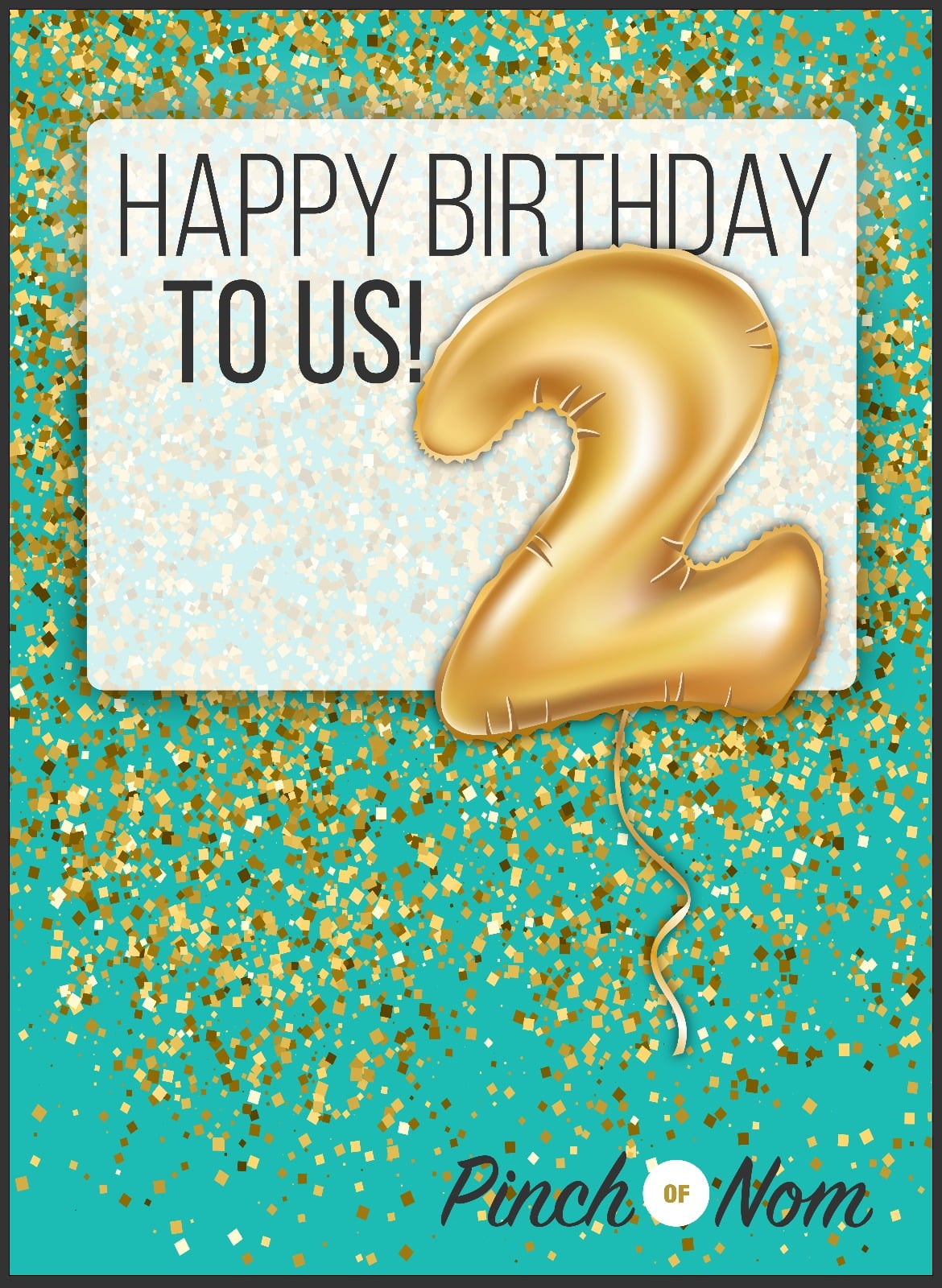 We thought we’d celebrate this by divulging some of the stories of how Pinch of Nom got started, how it’s gone from something small and twee to absolutely bloody mad, and the people that help keep Pinch of Nom ticking 24/7.

How Did It All Begin?

The story starts with Kay and Kate, who spawned the beast that be Pinch of Nom, you guessed it, around two years ago.

It began life as a method of sharing general food recipes with friends in Canada. Kay, being fed up of repeating herself over and over and over with the same recipe again and again decided that a website was the best method of recipe repetition.

The Pinch of Nom website in all its glory

The first recipes that featured on the site, not quite in the same capacity that they’re in now, were Yorkshire puddings and ribs.

Originally, Pinch of Nom was intended to be a website dedicated to absolute treat meals.

We’re talking loads of butter, sugar by the wheelbarrow and more cheese than is physically possible to eat. If there’s such a thing…

The Beginning Of Healthier Recipes…

Before the stodge-fest of recipes could begin, Kay and Kate decided enough was enough and joined their local slimming group.

Doing this inspired them to create recipes that were both super tasty, and slimming friendly. The rest, as they say, is history!

Kay’s done rather well on her slimming diet – Click the picture to see how she lost 13.5lbs in one week, healthily!

What started off as ‘just’ a website of recipes quickly evolved to include a huge presence on Facebook and Instagram, making sure that it’s easier than ever to access our recipes, advice and inspiration.

With everything taking off pretty quickly, there became the need for other people to join the crew.

Aly was first up for recruitment, having joined Kay and Kate at their local slimming group.

She’s usually found on the Facebook group, but is currently tending to a new small child. We can’t wait to have her back! 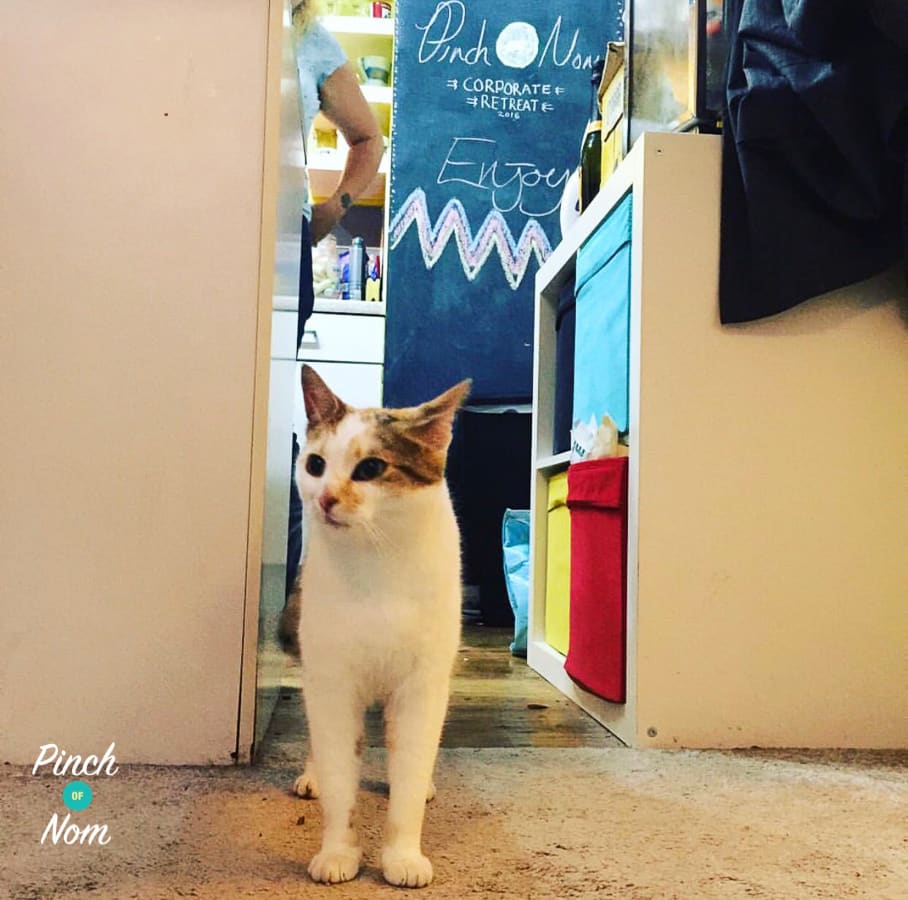 At the very first Pinch of Nom gathering, the cat came from nowhere!

Second aboard was Michael. He’s amazing, talented, eloquent, and definitely not writing this article.

He spends most of his time messing about, occasionally writing articles and taking charge of the Pinch of Nom Instagram account.

He was plucked from a bizarre email exchange involving telepathy and spice rubs. 18 short months later he’s obsessed with Pinch of Nom, some would question brainwashing. But that’s fine as long as it’s low in calories. 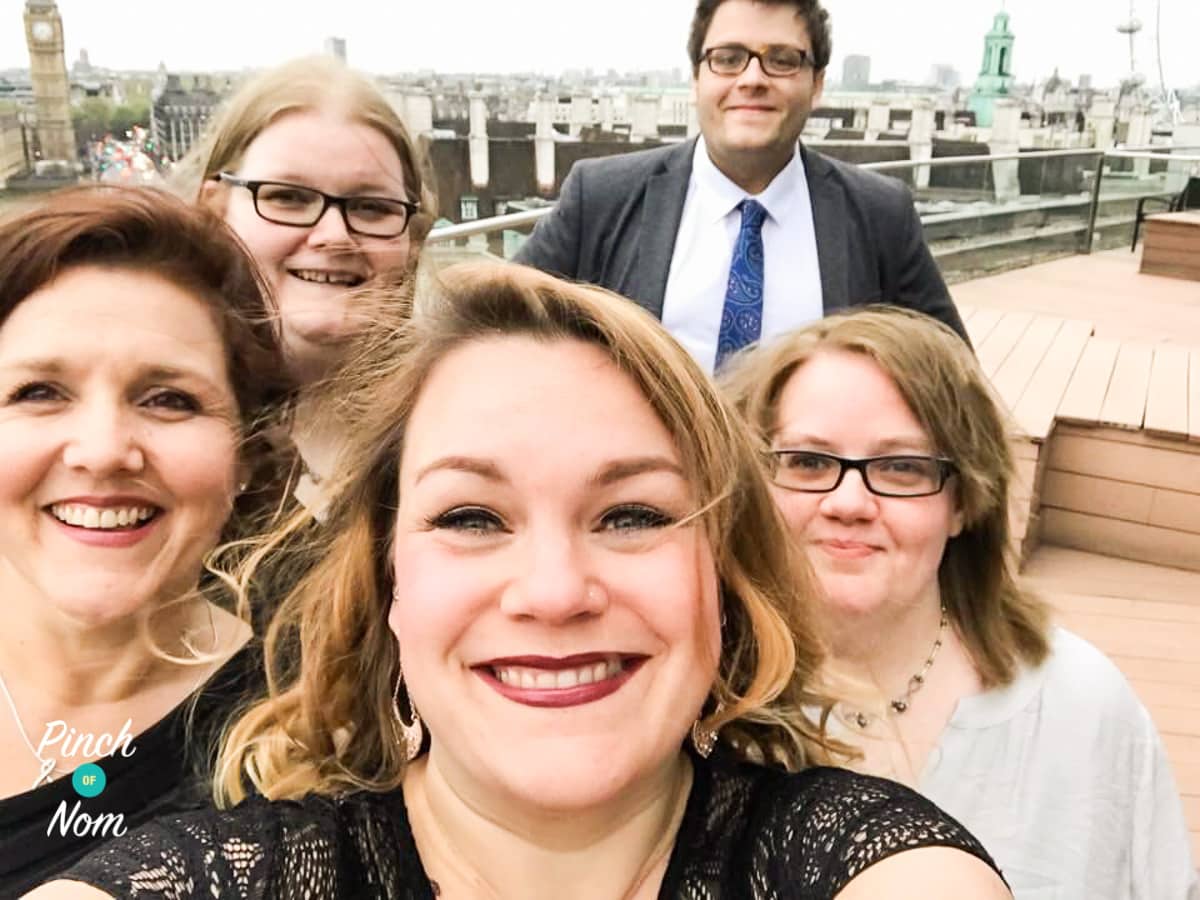 The Pinch of Nom team in London ready for the 2017 UK Blog Awards!

Emma rocked up next. Having joined the Facebook group when it consisted of a heady 3,000 members (we now have over 460,000 members…), she quickly started posting photos of her own Slimming & Weight Watchers Friendly creations.

Conversation turned to Game Of Thrones, and her fate was sealed.

You’ll find her crying into WordPress producing lots of the amazing recipes you love, keeping a beady eye on the Facebook group and just getting up to no good.

Her poor husband Rich has also been dragged onto the boat, lending his video mad skills and utter patience to the Facebook group. Poor bloke. 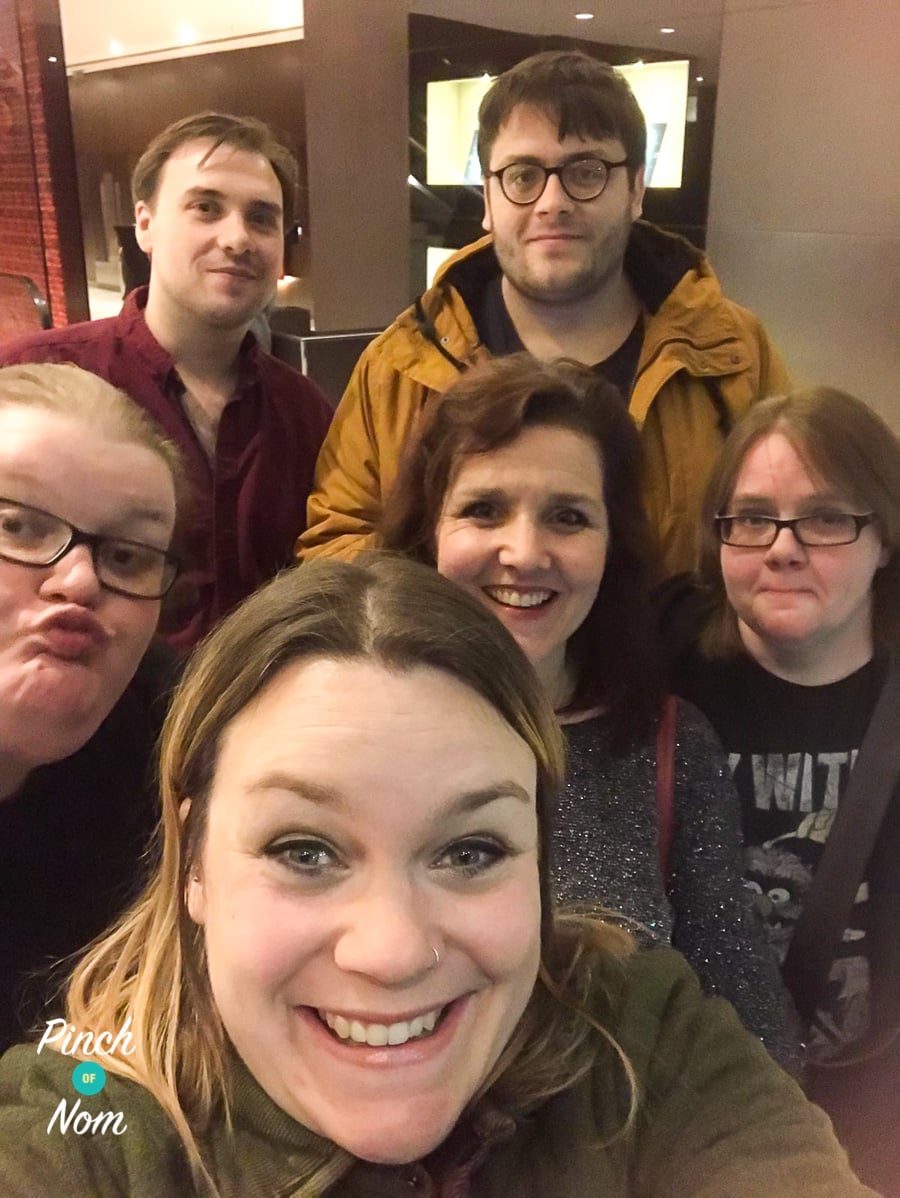 The Pinch of Nom team enjoying a Christmas treat in London

Janie (or Janet, don’t ask) was next to scramble up the side of the ship. Her story is a an awful lot like Emma’s.

She was first a member of the Facebook group, and then she ended up being recruited as group admin, where she still frequently lurks.

Janie also heads up our Shopping Essentials mammoth list every week, as well as keeping a beady, teachery eye on all our grammar.

I’ll use my poetic licence to state that both Emma and Janie are blummin’ incredible at everything Pinch of Nom-ish.

Vince is our behind-the-scenes man, working very hard indeed on keeping the website afloat, doing all sorts of coding wizardry to keep the website looking as good as it does.

Nothing (and I mean nothing) is ever too much trouble for Vince, and we’re really lucky to have him. 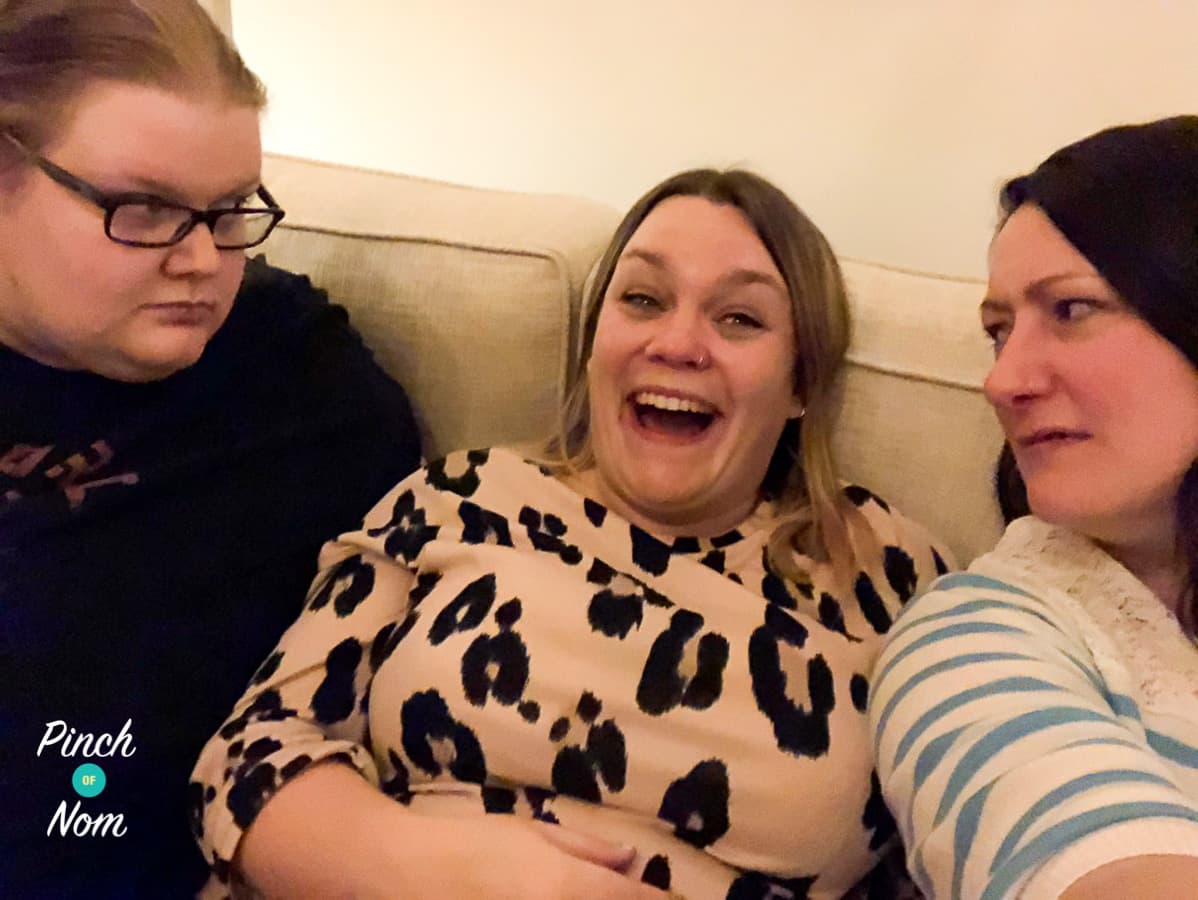 Kay, Emma and Laura getting acquainted…

Laura is the latest member of the ship, having practically begged for a job and, somehow, it worked.

She’s been quick to make a good impression, showing off her photography and graphics skills to the masses. 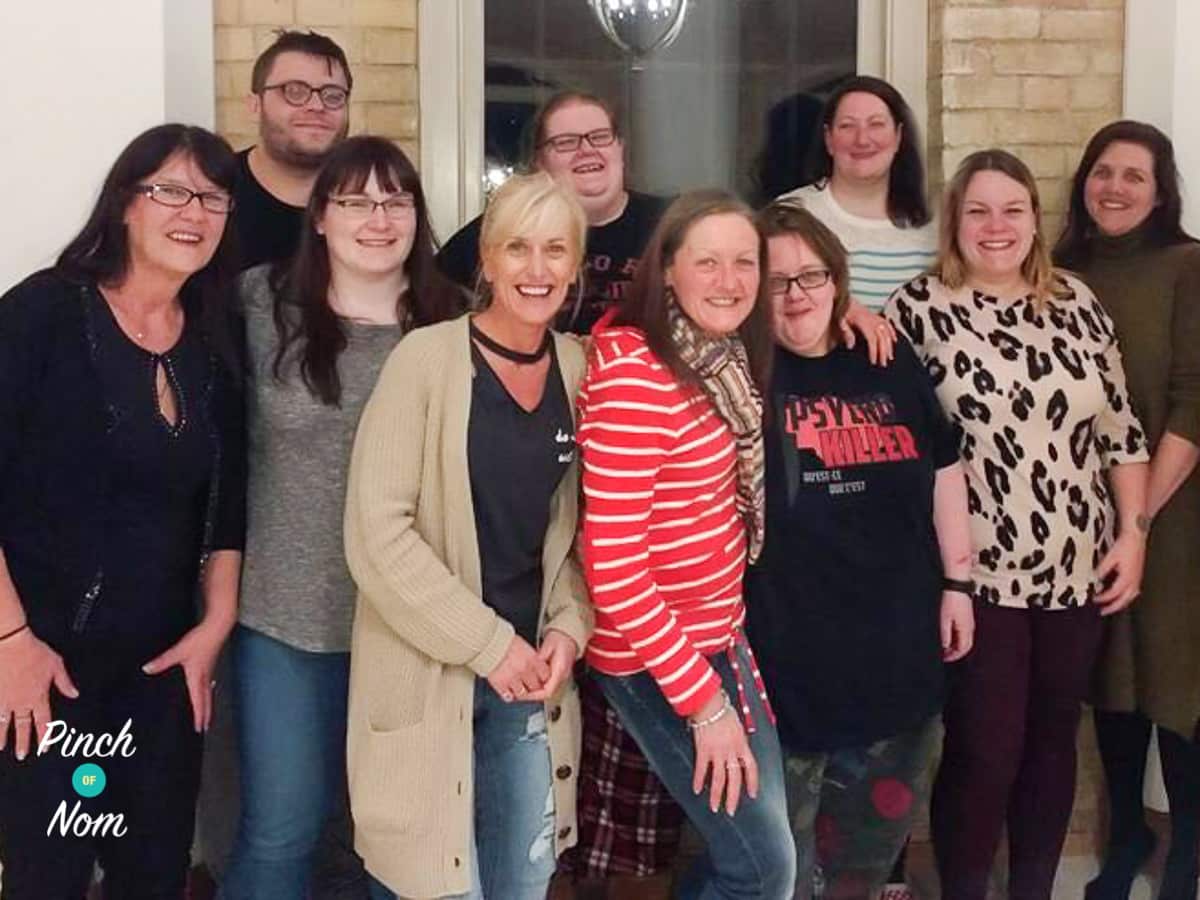 At our recent weekend away, everyone together for the first time! L-R Teresa, Michael, Emma B, Jackie, Kay, Tracy, Kate, Laura, Emma and Janie

She’s also part of our Facebook group admin team, alongside Tracy, Teresa, Emma B and Jackie, who are all just lovely, lovely people.

They all work so hard to keep on top of the ever-expanding Facebook group, and we’re super-duper grateful to have found such an amazing bunch.

We’ve had a good few wonderful moments at Pinch of Nom!

Most recently, we’ve managed to hit the magic 1,000,000 likes on our Facebook page, which is a bit crazy! We never thought we’d get there so quickly, and to achieve it just reinforces how amazing our readers are!

We were so honoured to be nominated for our first UK Blog Awards in 2017, just a year after Pinch of Nom was formed.

Although we didn’t win (highly commended though!) we had such a brilliant time. We’re nominated for the 2018 awards too, we’d better bloody win it this year… 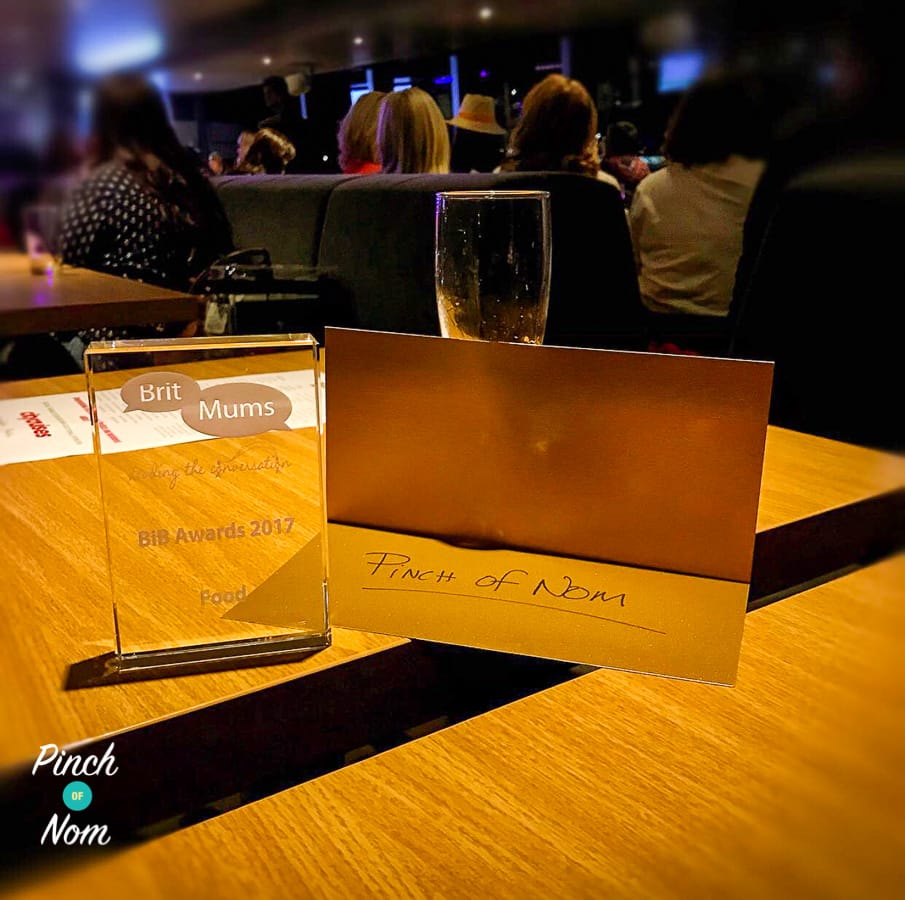 Talking of winning awards, we were REALLY shocked to win our very first award in 2017 at the Brit Mums Best In Blogging Awards in Central London.

What a shock that was! It really inspired us and made us believe we could go even further!

We’ve recently come back from enjoying a weekend in the East Anglian countryside, meeting our Facebook group moderators for the first time.

It made everyone very sure that we had such a good bunch of people helping make Pinch of Nom a success, and we all came away very good friends. 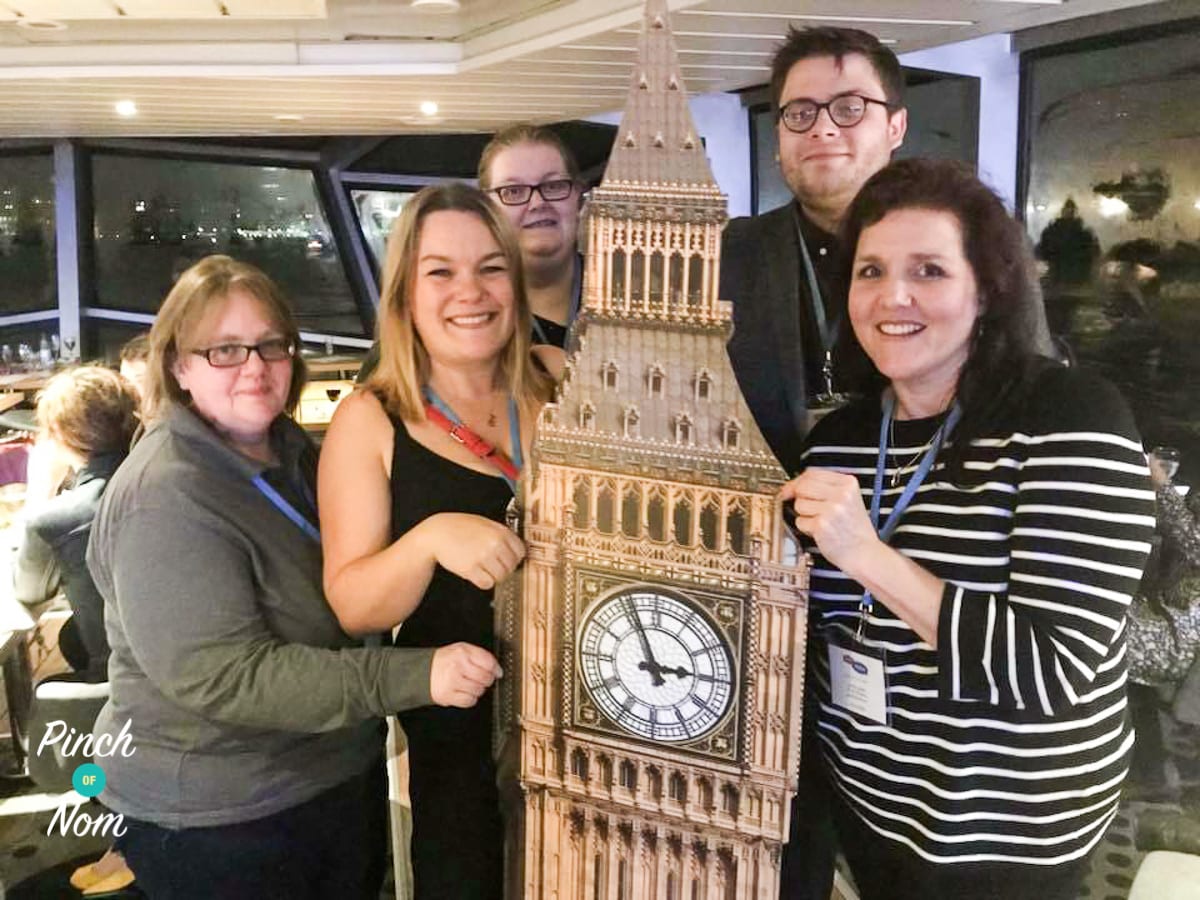 All aboard the awards boat in London!

Friendship. That sums up our main achievement in the last two years. Everyone at Pinch of Nom considers each other as really good mates, making the stressful times much easier, and the happy times even drunker.  It’s just ace!

A Huge, Massive Thank You!

Firstly, I’m going to use my poetic licence again and do some sycophantic thanking of Kay and Kate.

Without you two, Pinch of Nom would never of happened, and certainly wouldn’t have become the roaring success it has done. So thank you very, very much from all of us.

Secondly, our mates at Mediavine who keep us ticking over, providing the advertising knowhow that put the coins in the meter and keeps Pinch of Nom tickety boo.

We were lucky enough to have Amber and Stephie from Mediavine join us in London for the Brit Mums conference, who were both absolutely lovely!

Thank you SO much!

And last, but by no means least, a massive thank you to YOU!

Yes, you, reading this. Everyone who’s a member on the Facebook group, one of the million or so likers on our Facebook page, one of over 150,000 followers on Instagram, any of the hundreds of thousand of people who check out the website every day, you’re all amazing. 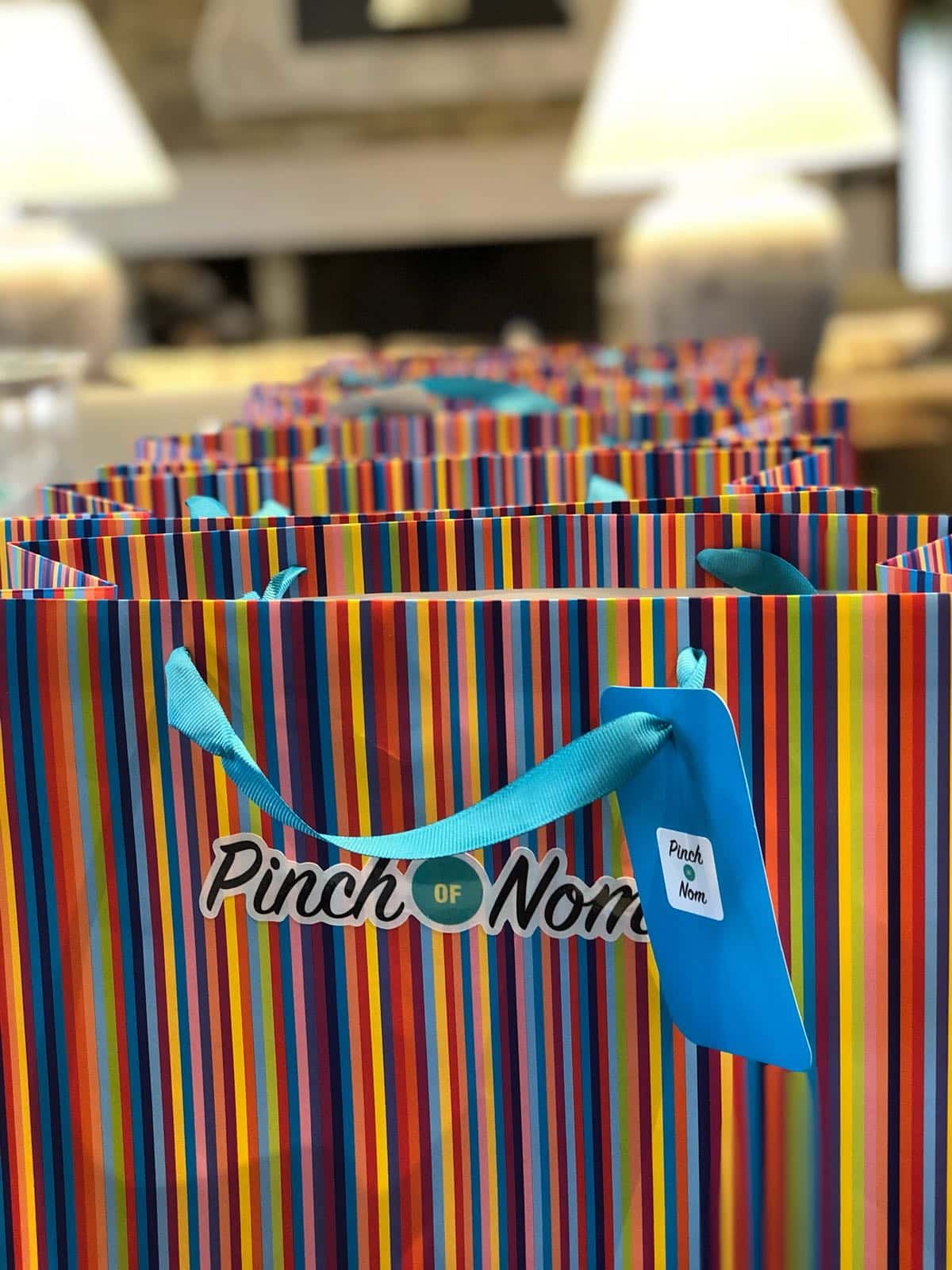 We really, truly and honestly could not be where we are without the support of our readers, having such an amazing group of supportive, like-minded and supportive people is a rarity and something we never take for granted.

Thank you, here’s to the next two years and so much more!

Need some extra help & motivation on your slimming journey?

Come join our Facebook group! We have over 867,000 members, who want to help you! You wouldn’t want to miss out on the fun would you?

You might just find the inspiration you need from our awesome members. If you’ve joined already why not invite any friends that may find it helpful?