These tasty treats are full of warming, sweet cinnamon – perfect on a chilly afternoon with a cuppa. You could even turn them into a dessert with some low calorie ice cream! 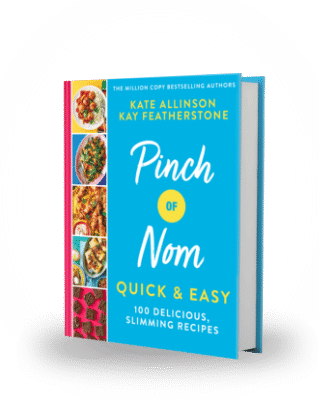 Also in these categories:

You’re amazing, look at the Cinnamon Swirls dishes you’ve made…

Show us what you’ve made

Would you like your creations featured on our website, so we can all see how amazing your dishes are? Head over to our ‘Pictures of Nom’ gallery and upload your photos - you could be picked to win some exclusive Pinch of Nom Swag! 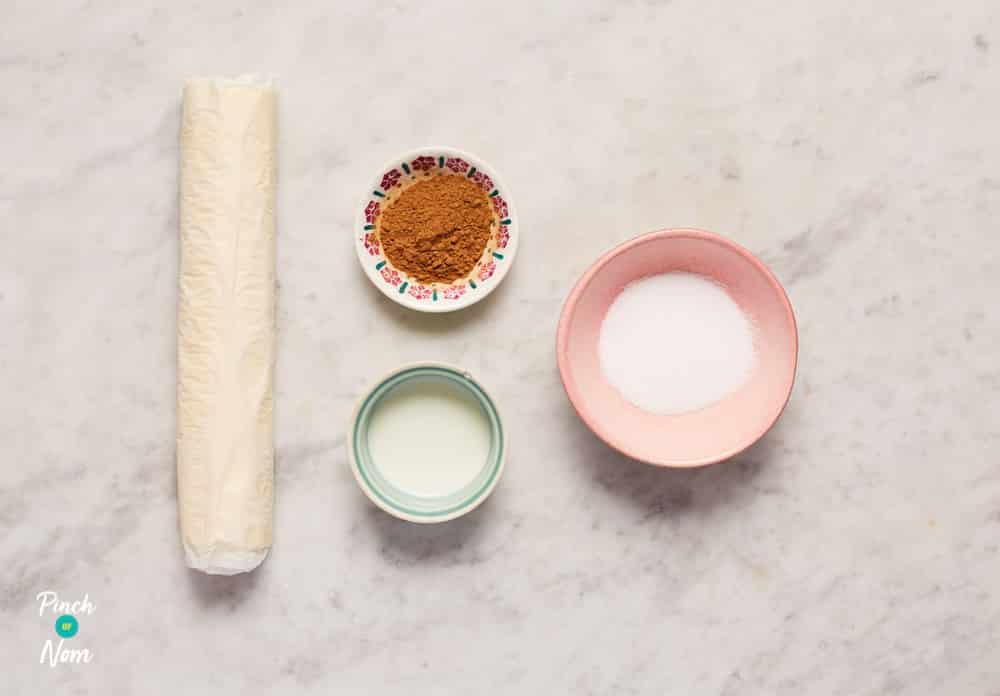 For the full list of ingredients and comprehensive instructions, please see the recipe card at the end of this post. Before you scroll, there’s important stuff to know in the blurb!

Our Cinnamon Swirls are packed full of warming, sweet cinnamon which makes them perfect for pairing with a cuppa on a chilly afternoon – they’re great if you’re counting calories or following a plan like Weight Watchers too!

These have been really popular over on our Facebook group, so we thought we’d come up with our own version! We think that these Cinnamon Swirls are fantastic at any time of the year, but they’re especially good at Christmas!

Why not experiment with different spices? Ground ginger or mixed spice would also work really well in these Cinnamon Swirls. Enjoy as a snack, or you could even turn this recipe into a dessert by pairing them with some low calorie ice cream – yum!

What diets are these Cinnamon Swirls suitable for?

This Cinnamon Swirls recipe can be made dairy free as long as you swap out the following ingredients for dairy free versions;

Please make sure to double or triple check all of your ingredients if you’re cooking for people with allergies.

How Weight Watchers friendly is this Cinnamon Swirls recipe?

Weight Watchers’ new PersonalPoints plan calculates each individual’s Points allowance based on their unique food preferences and goals. This means we’re no longer able to offer exact WW points for our recipes.

The good news is that all of our recipes are still Weight Watchers friendly! If you have any questions about your Points budgets or you’re unsure how a certain recipe will fit into your plan, please reach out to Weight Watchers directly.

Do you need any special ingredients to make these Cinnamon Swirls?

This post contains affiliate links. Find out what this means.

You’ll need some light puff pastry, which can be found in most supermarkets.

Below we added some of our communities most common hints and tips. We hope you find them useful.

NEW TIP
Quick and easy to follow recipe
Once rolled I placed the pastry in the fridge for a few minutes to stop the knife from sticking to the pastry. I added raisins for more sweetness.
NEW TIP
I added extra cinnamon as it my favourite spice.
Absolutely brilliant dessert, a little cinnamon in the icing sugar for drizzling on top.

Send us a Hint or Tip

We love hearing from you, submit any tips or tricks you have for this dish and we’ll review them and add some of them here. Just click here.

SEND US a HINT & TIP, Or QUOTE for this recipe

THANKS
we have your picture

(Please remember others may of had the same idea as you!)

How many calories are in these Cinnamon Swirls?

There are 34 calories per portion in these Cinnamon Swirls, which means they fall into our Everyday Light category.

These Cinnamon Swirls are perfect if you’re following a calorie controlled diet and fit well with any one of the major diet plans such as Weight Watchers.

As a guide, an average man needs around 2,500kcal (10,500kJ) a day to maintain a healthy body weight. For an average woman, that figure is around 2,000kcal (8,400kJ) a day. Obviously, if your goal is to lose weight then you might want to adjust these slightly! You can read more about these recommendations on the NHS website.

Preheat the oven to 170ºC and line a baking tray with baking parchment.

Unroll the pastry and moisten with the cold water. Sprinkle over the granulated sweetener, followed by the cinnamon to form an even layer. 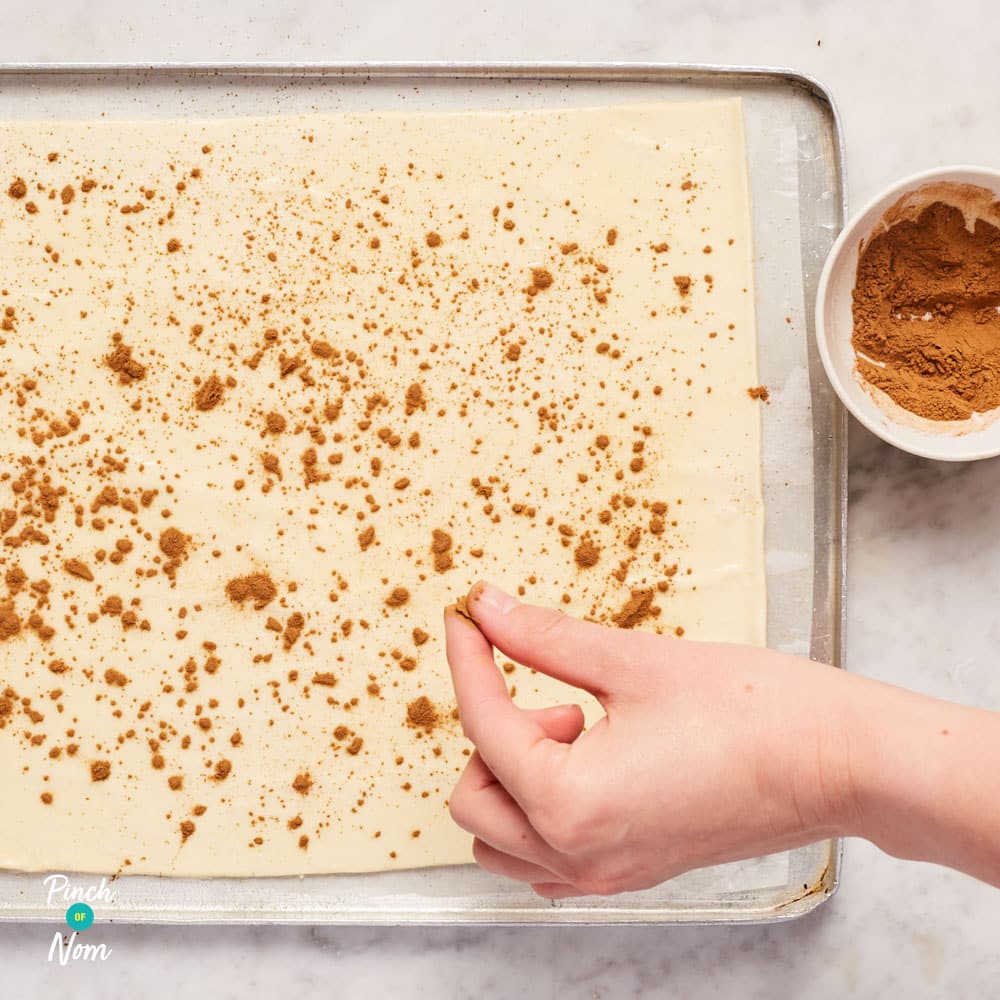 Roll the pastry along the long edge, to form a long roll. Try to keep the roll as tight as possible. Use a little water along the far edge to help the roll stick together. 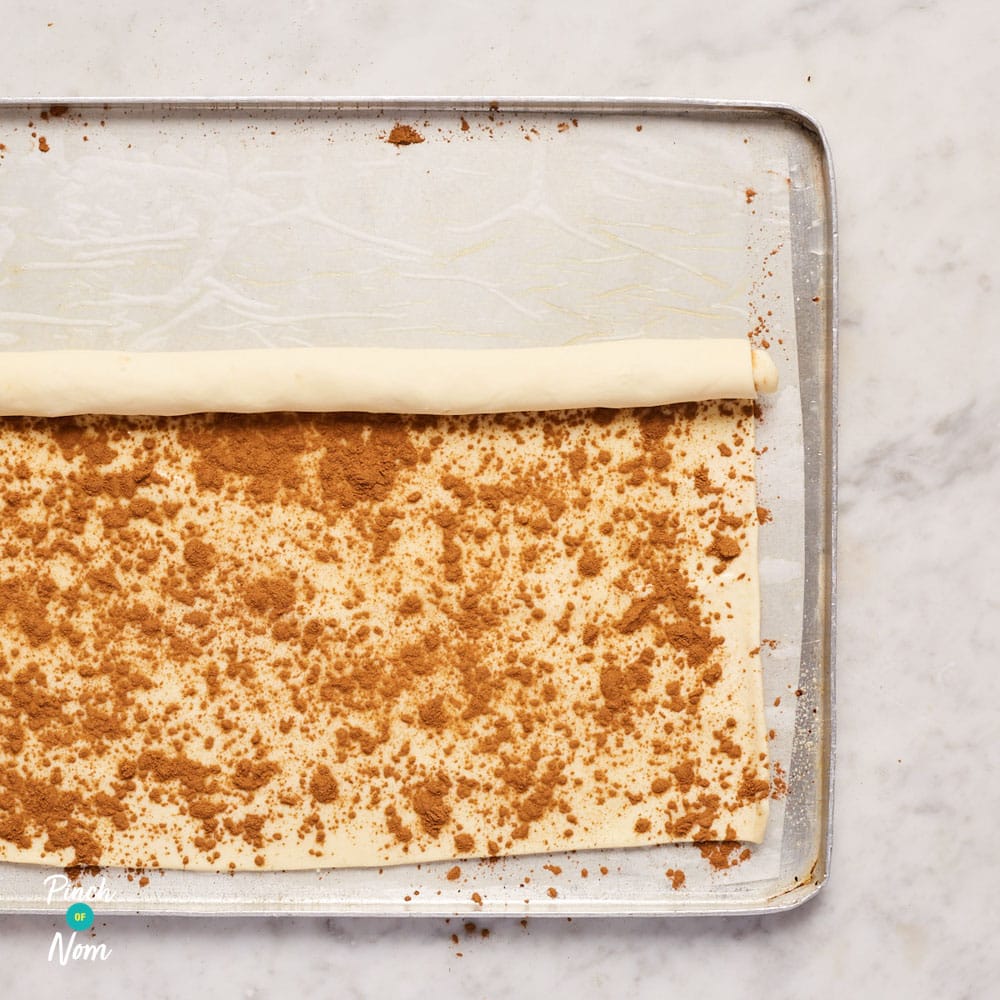 Cut into 32 pieces – a bread knife is good for this – and place each swirl onto the baking tray. Press each swirl down a little to help the pastry layers to stick together. 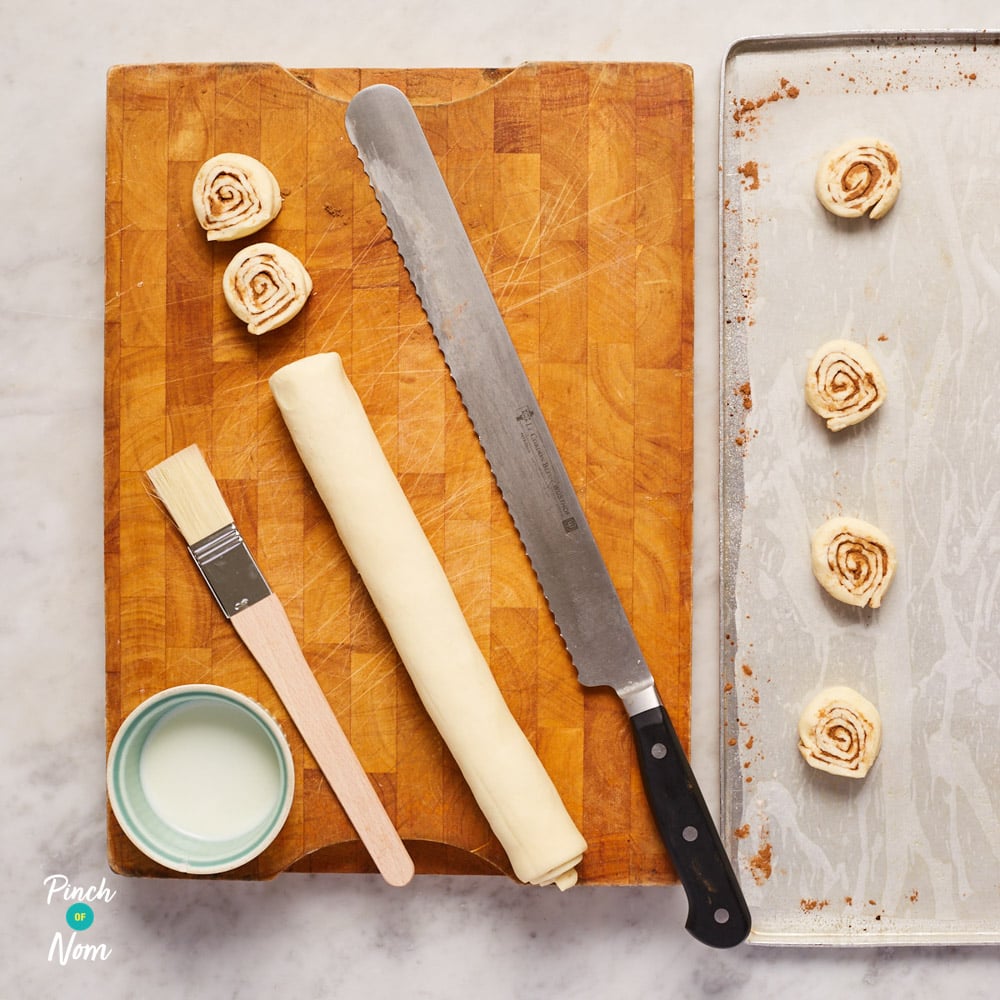 Brush each swirl with a little milk, and bake for 20 minutes until crisp and golden. 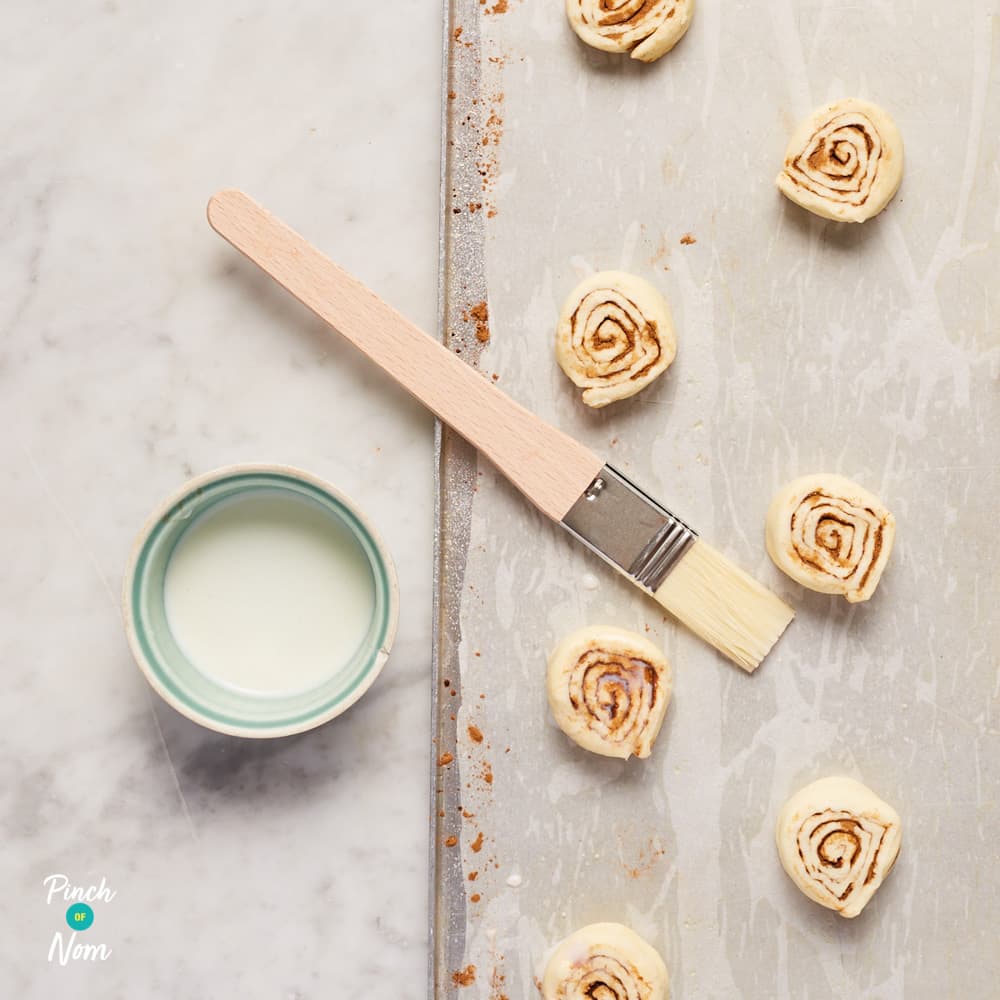 Leave to cool on a wire rack and enjoy! 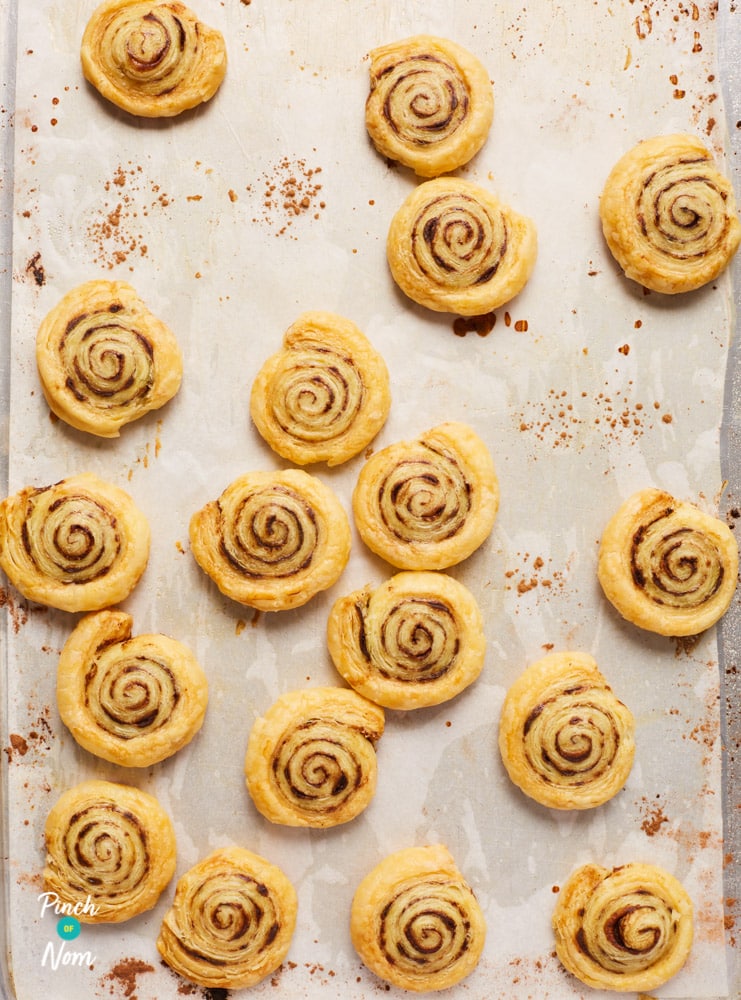 What could I serve with these Cinnamon Swirls?

These Cinnamon Swirls are a perfect afternoon snack but they also make a fantastic dessert when served with low calorie ice cream alongside the following starter, main and accompaniment:

Toad In The Hole

How do you know when these Cinnamon Swirls are cooked?

You’ll need to bake these Cinnamon Swirls for around 20 minutes or until they’re crisp and golden.

Standard advice here in the UK is to cook food until it has reached 70°C and stayed at that temperature for 2 minutes. This is to keep your family safe.

How long can you keep these Cinnamon Swirls in the fridge?

Can I freeze these Cinnamon Swirls?

Yes you can! This recipe can be frozen after the Cinnamon Swirls have cooked and cooled, but please remember to do the following;

Don’t forget to add a label with what it is, and on what date you put it in the freezer!

How do I reheat Cinnamon Swirls?

From chilled: Pop into a hot oven for about 5 minutes to crisp up.

From frozen: Allow to defrost, and then as above.

These tasty treats are full of warming, sweet cinnamon – perfect on a chilly afternoon with a cuppa. You could even turn them into a dessert with some low calorie ice cream!

We use a fan assisted oven for all of our recipes. Check out our oven temperature conversion guide.

Please do not screenshot this. Recipes are updated often

Find out why here

Tip: You could also use different spices - ground ginger or mixed spice would also work well!

Share this recipe with your friends or followers, or keep in touch with us by simply using one of the sharing buttons above. Use the hashtag #PinchofNom to be in with a chance of winning a swag bag at random!

Hi,
Once cooked, can I put them in an air tight container and eat them cold?

Hey Charlotte, yes the cinnamon swirls will keep for up to 3 days in an air tight container. Hope that helps!

I made these today and they don’t seem to have “puffed” up at all what did I do wrong? Did I roll them too tight? Etc? Thanks.

Hi Amy, yes it sounds like they may have been rolled too tightly, or flattened a bit much. They are made out of puff pastry though, so they won’t puff up like a traditional Danish pastry which is made from layered yeast dough.

Hi can the granulated suger be replaced for sweetener

Hi Gail, yes you can swap the granulated sweetener for sugar.

Hi cooking g these now my pastry was sticking did you use anything stop.it sticking and found it very difficult to roll

Hi Charlotte, When I made these I unrolled the pastry but left it on the greaseproof paper that it comes rolled up in. Sprinkled it with the granulated sweetener and cinnamon and then rolled up the pastry swirl on the paper so it can’t stick to your kitchen surface, then transferred them to the tray once I’d sliced them. Hope that helps!

Hi Debbie, when we made these Cinnamon Swirls we find it’s best to roll the pastry along the long edge towards yourself to form a long roll, this will then slice into 32 swirls. Hope that helps!

Is one serving one roll? Sorry if this is a silly question but couldn’t see it in the recipe notes. Thanks!

Hi Waheeda, yes, one Cinnamon Swirl is one serving, so each one contains 35 calories. Thankyou for your question and hope you enjoy this recipe.

How many calories each would they be if using the normal puff pastry?

Hi Charlotte. We calculated the calories based on light puff pastry. If you want to use regular puff pastry, check the calories on the packet as brands can vary slightly, and then you can use our handy guide to calculating calories in recipes. You can find that here.
https://pinchofnom.com/how-to-work-out-calories-and-points-in-a-recipe/

These look amazing, but I’m struggling to find light puff pastry? Can I buy this ready made, or do I need to make it myself?

Hi Francesca, These taste as good as they look. You can buy light puff pastry sheets in most supermarkets. Hope this helps, please let us know how you get on.

I found a light puff pastry that’s also vegan in Asda for £1.10 found it delicious!
Hope this helps guys x

Hi Laura, thanks so much for letting us know where you found light puff pastry that’s really helpful!